At least 15 people have been killed and dozens injured in anti-coup demonstrations in Sudan.
Ummatimes - The total death toll, namely 39 people, during protests against the Sudanese military seizing power on October 25, 2021.
According to Al Jazeera, demonstrations that killed 15 people took place in the capital Khartoum.
Protesters march in the neighborhoods of Khartoum and Omdurman City on Wednesday (11/17/2021).
Security forces fired live ammunition and tear gas after cell phone lines were cut off on Tuesday (16/11/2021). 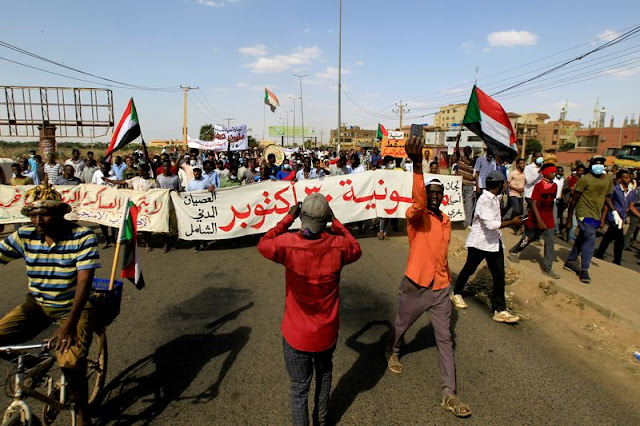 However, the police denied using live ammunition.
Meanwhile, state television has announced an investigation into the deaths.
The doctors' union said most of the victims had gunshot wounds to the head, neck and chest.
However, the demonstrators continued to demonstrate behind the barricades.
In a statement, the Central Committee of Sudanese Doctors (CCSD) said security forces used live ammunition.
"(Security forces) used live ammunition in various areas of the capital and there were dozens of gunshot wounds, some of them in serious condition," he said.
CCSD also said security forces had arrested the injured people inside the Khartoum hospital.
The Sudanese Professionals Association condemned the grave crimes against humanity and accused the security forces of premeditated murder.
"The massacre that day reinforces our slogan: no negotiations, no partnership, no compromise (with the military)," protest organizers from SPA said.
Some protesters carried photos of people who had been killed in previous protests and Abdalla Hamdok, the civilian prime minister who was placed under house arrest during the coup.
They carried photos with the slogan: "Legacy comes from the street, not from the cannon."
Pictures of protests in cities and towns including Port Sudan, Kassala, Dongola, Wad Madani and Geneina were posted on social media.
Demonstrators have taken to the streets against a security force crackdown that has killed dozens of people since the military seized power last month.
The protesters demanded full surrender to the civilian government and that the coup leaders be tried in court.
Sudan's supreme general, Abdel Fattah al-Burhan, declared a state of emergency on October 25.
He dissolved the government and detained civilian leaders.
Last week, al-Burhan appointed a new Ruling Council, replacing the country's transitional government, which is made up of civilian and military figures.
It was formed in 2019 as part of a power-sharing agreement between members of the army and civilians with the task of overseeing Sudan's transition to democracy after a popular uprising that led to the overthrow of longtime ruler Omar al-Bashir.