Duterte Refuses to Compete with His Daughter in Philippine Presidential Election

Duterte Refuses to Compete with His Daughter in Philippine Presidential Election

Philippine President Rodrigo Duterte will run for next year's Philippine presidential election on Monday, his spokesman said, but he will not be competing with his daughter who is running for vice president.
Ummatimes - Duterte's spokesman, Harry Roque, made comments at the election commission and said Duterte had decided he would run in the election. Roque did not say in which position the president would put forward his candidacy, while Duterte could not run for president again.
Monday's deadline for Philippine political parties to finalize next year's presidential and vice presidential nominations left voters unable to predict the political stage of the Philippine presidential election.
Roque's remarks contradict statements Saturday by Duterte's communications chief, who said the president would register to run for vice president, and challenged his daughter, Sara Duterte-Carpio, who is competing for the same position. 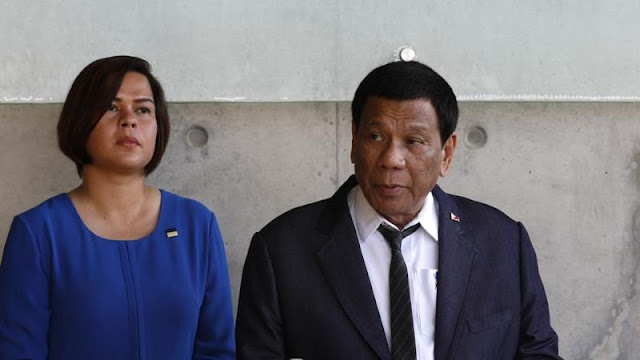 In the Philippines, the president and vice president are elected in separate contests.
Duterte can run for other posts such as senator, congressman, mayor or governor. He was mayor of Davao City before running for president in 2016.
His 43-year-old daughter is expected to run to succeed him as president due to his popularity and clear lead in all polls this year about the candidate of choice.
He did register to run for vice president, but could still change his mind.
It's not clear who Duterte's daughter will run with, but the presidential candidate and the late strongman's son, Ferdinand Marcos Jr. said he wanted her to be his partner.