Ecuador's President Guillermo Lasso announced plans to restore prisons, including with military involvement, Monday (15/16) local time. The plan was carried out as part of measures to tackle a wave of violence in prisons that claimed lives.
"Measures to calm prisons have been agreed with various officials," Lasso said. He said prison violence is one of the biggest crises the country has faced in decades.
Ummatimes - The president appointed General Orlando Fabian Fuel as head of Ecuador's armed forces last Sunday night local time. He also appointed Luis Burbano as the new commander of the Ecuadorian army while placing Fausto Cobo, head of the country's intelligence agency, in charge of the SNAI prison authority.
"Ecuador faces a serious external threat from attacks by the mafia of drug smugglers, the same ones who intend to take control of detention centers and take away our peace of mind," Lasso told a news conference in Guayaquil. 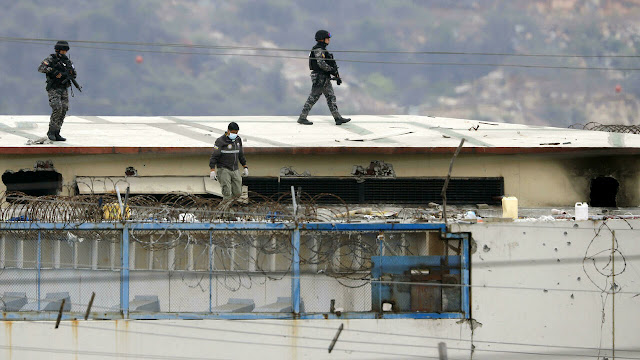 Authorities linked the prison riots to gangs of drug smugglers competing for trade routes. Lasso said allies including the United States and Colombia would help Ecuador in the fight against drug trafficking.
"Attempts to mediate with the gangs will be carried out, albeit without making concessions to the leaders to secure peace in prisons," the president said.
"Military personnel will also participate in security controls inside and outside the prison," he added.
Fighting between criminal gangs at the Penitenciaria del Litoral prison killed up to 68 inmates last weekend. While 25 other inmates were injured.
By the end of September this year, 119 inmates had also died in prison in the city of Guayaquil. The incident was the worst prison violence in the country's history.