Paris pays homage to UNESCO with a light show at the Eiffel Tower on Friday (12/11). The show was to celebrate the 75th anniversary of the United Nations (UN) Educational, Scientific and Cultural Organization.
Ummatimes - As a sign of the French capital's friendship with the organization it has hosted since 1946, the tower features the words "75 years" next to the UNESCO logo. According to UNESCO, the coat of arms is a stylized Greek temple and a symbol of hope for the creation of a peaceful world. 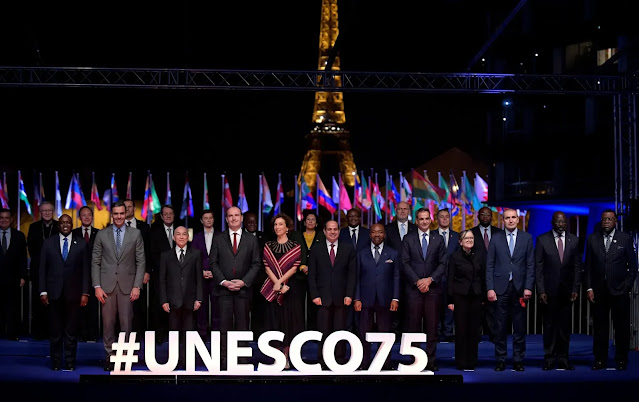 The light show is part of a wider ceremony. The memorial includes visits by more than 20 heads of state and a projection by Brazilian photographer Sebastiao Salgado at UNESCO headquarters.
The agency established from the era of the devastation of the Second World War to protect the common cultural heritage of mankind. The agency is renowned for designating and protecting archaeological and heritage sites, from the Galapagos Islands to the tombs of Timbuktu.
Former French Minister of Culture, Audrey Azoulay, was elected to a second four-year term as UNESCO director general earlier this week. He was appointed in 2017 after a bitter campaign trying to revive the organization's fortunes after former US President Donald Trump withdrew on charges of anti-Israel bias.