Singer Elton John accepts the rare British royal award from Prince Charles during a ceremony at Windsor Castle, Wednesday, November 10, 2021.
Ummatimes - This award is in recognition of his music career spanning more than five decades and his AIDS-centred charity work.
John, 74, received the Order of the Companions of Honour, a limited award with a maximum of 65 members.
The musician, who last month scored his first top-charting hit in 16 years in a collaboration song with Dua Lipa Cold Heart, joining artists such as David Hockney, actress Judi Dench, musician Paul McCartney and writer J.K. Rowling in the award. 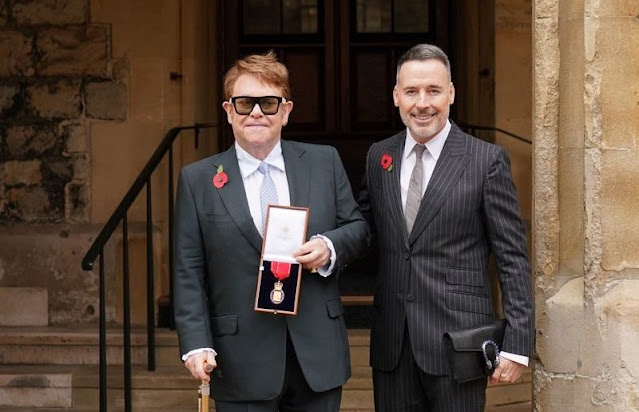 One of the best-selling artists of all time, with hits such as "Goodbye Yellow Brick Road", "Rocket Man" and "Your Song", John was knighted by Queen Elizabeth in 1998.
John, accompanied by husband David Furnish at the ceremony, walked with the aid of a cane. In September he announced his European tour would be postponed due to hip problems.
John has raised millions of pounds to fight AIDS, including founding the Elton John AIDS Foundation in the 1990s.