Erdogan Sends Greetings for the Jewish Day of Hanukkah

Erdogan Sends Greetings for the Jewish Day of Hanukkah

The Turkish president on Monday expressed his sincere best wishes at the Jewish festival of Hanukkah. He also noted that Turkey has been home to various prominent cultures for thousands of years.
"Recognizing the historical responsibility this wealth brings, we see it as one of our most important tasks to fight discrimination based on language, religion or race, and to ensure that all our citizens can live together freely and safely," said Recep Tayyip Erdogan in a statement.
Ummatimes - Erdogan underlined that at a time when intolerance towards different beliefs and identities in the world is increasing, Turkey is against all kinds of discrimination. Ankara is taking all necessary steps to "properly fulfill the responsibility that history has imposed on us".
"With this in mind, I congratulate all Jews, especially our Jewish citizens, on the Hanukkah festival, and wish this special day to bring peace," Erdogan added. 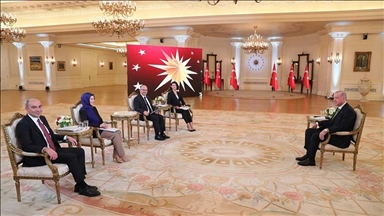 Hanukkah is an eight-day holiday that marks the rededication of the second Jewish Temple in Jerusalem in the second century BC. Also known as the Festival of Lights, Hanukkah in 2021 begins on a Sunday night and will end on the evening of December 6th.​​​