Ethiopian PM Takes to the Battlefield, Joins the Military Against Rebels!

Ethiopian PM Takes to the Battlefield, Joins the Military Against Rebels!

The Prime Minister of Ethiopia, Abiy Ahmed, reportedly joined the fight against Tigray rebel forces. The information was spread by state media on Wednesday (11/24/2021), as rebels from the north drew closer to the capital.
Ummatimes - State media did not show pictures or videos showing Abiy on the front lines. A spokeswoman for the Prime Minister's office, Billene Seyoum, declined to comment on details of the location. He only said that the 45-year-old man had arrived at the frontlines since Tuesday (11/23/2021).

1. Observers consider Abiy's actions to be very dangerous for Ethiopia

An observer from the International Institute for Democracy and Electoral Assistance, Adem Abebe, said that Abiy's actions were very risky to Ethiopia's survival.
“The situation is very dangerous. If (Abiy) is injured or killed, not only will the federal government collapse, the army will also collapse," Abebe said. 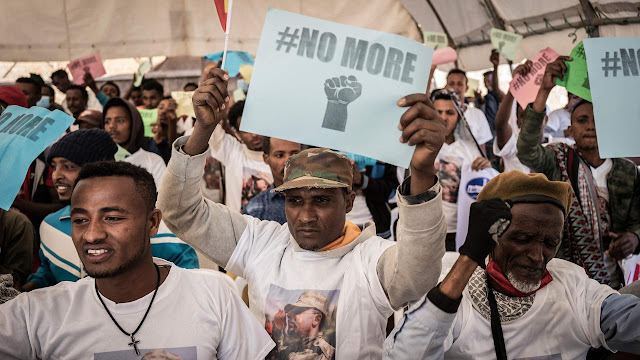 Previously, Abiy had asked all the people of Ethiopia to participate in the war. The decision was announced since the state of emergency was imposed. Meanwhile, Deputy Prime Minister, Demeke Mekonnen Hassen, will take over routine government affairs while Abiy is away.
The advancement of a country's top leader to the front line of battle was not uncommon. Abiy's actions have previously taken place in other parts of Africa, including Chad's president, Idriss Deby Itno, who was killed while fighting on the front lines against rebels in April.

2. Desire to advance to the forefront

Abiy had previously planned to advance to the front to defend Ethiopia from rebel attacks. On Monday night, Abiy announced that he would personally direct the war against Tigray's forces and their allies.
"Let's meet on the front lines of war. The time has come to lead the country with sacrifices," Abiy wrote on Twitter, reported by Al Jazeera.
Last month Tigray's troops and their allies threatened to march on the capital Addis Ababa. They are also scrambling to cut a transport corridor linking landlocked Ethiopia with the region's main port of Djibouti.

3. Mobilizing the military has the potential to undermine negotiation efforts

The US special envoy for the Horn of Africa, Jeffrey Feltman, said a military operation carried out by Ethiopian forces would risk derailing the ceasefire efforts. The statement came after he visited Ethiopia to meet Abiy to discuss a diplomatic solution.
According to Feltman, Abiy and the rebels have confidence in their military capacity.
"There has been some nascent progress in getting the parties to move from a military confrontation to a negotiating process," Feltman said.
"What concerns us is that this fragile progress risks being surpassed by worrying developments on the ground, which threaten the stability and unity of Ethiopia as a whole," he added.