The foreign ministers of the European Union (EU) will expand sanctions against Belarus over the issue of migrants to the Polish-Belarusian border. The sanctions are to ensure that airlines and travel agents are deemed to be carrying migrants.
"We will give the green light to extend the sanctions against Belarus, so that they can be applied to all parties participating in the smuggling of migrants into the country," EU foreign policy chief Josep Borrell said Monday (11/15/2021). .

1. Sanction decision will be taken today

The EU accuses Belarus of encouraging migrants to come to its territory and of encouraging thousands of them to cross into Poland. Following the accusations, a number of EU countries urged that sanctions against Minsk be expanded. 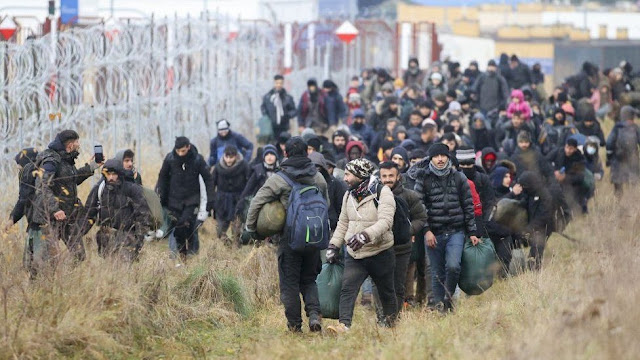 On Thursday (11/11/2021), two EU diplomats considered imposing sanctions on Belarusian airlines, so that migrants and refugees who want to enter the bloc do not increase. The decision will be taken today when EU foreign ministers meet.

2. The airline is suspected of deliberately bringing migrants

Borrell said executives at airlines and travel agencies could be subject to travel bans and asset freezes in the EU. Some 30 Belarusian officials suspected of involvement in the crisis could also be targeted by sanctions.
Belarusian President Alexander Lukashenko is already under international sanctions for cracking down on election interference and arresting journalists. As a countermeasure, Lukashenko threatened to cut off gas flows to the EU, which he feared could trigger gas prices in the Blue continent.

3. There are about 4,000 refugees on the Belarusian-Polish border

An estimated 3,000 to 4,000 migrants and refugees, mostly from the Middle East and Afghanistan, have set up camp in Belarus, which borders Poland. They stayed there because Poland was not allowed to enter the EU, according to Al Jazeera.
Human rights groups have raised concerns over the well-being of the refugees. Some of them are reported to have died. Humanitarian workers, lawyers and journalists are prohibited from accessing the border area, whether it be from Poland or Belarus.
The EU accuses the Belarusian government of deliberately persuading migrants and refugees to enter Europe through its own country. The EU accuses Belarus of using refugees as "hybrid weapons" and calls Lukashenko a "gangster" for lying to refugees.