The flock of parrots (rose ring parakeet or Psittacula krameri), which flies in several areas of Tokyo, has begun to unsettle Japanese citizens.
Ummatimes - One of them is around the residential area of ​​Kawasaki Kanagawa City. "Parrot" with a total length of about 40 cm and a large size.
In recent years, the number of large parakeets has increased in and around Tokyo, and residents are having problems with droppings and the sound of swarming birds.
A park in a residential area of ​​Kawasaki City during the day, the sound of children echoing and becoming a place of relaxation for residents is now disturbed by the Wakakehonsei inko (parrot).
At dusk, the serene gardens take a complete turn, starting around 17:00 Japan time with the chirping of the parrot. 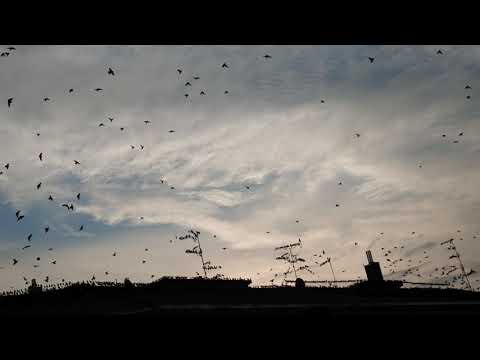 A large flock of green birds flew around the garden at high speed. After orbiting the sky for a short time, it stopped at one tree after another.
Parents and children who came to the park, “Hey, there are so many. I was surprised at first what was there."
Long wings grow on the tail of the lime green body. It features a striking display with a red beak.
The name of this bird is "Rose-ring parakeet". Originally, this was an exotic bird that inhabited India and Sri Lanka, but its numbers have increased from year to year, especially in Tokyo now estimated at around 1500 birds, perched on trees in parks and residential areas.
The rose-ringed parakeet group has certain characteristics.
Fly low towards the nest in the park where people walk. We will pass the height just above the person at high speed.
Even on the nearby tennis courts, as we moved through the trees, we would cross people playing low-altitude tennis many times.
A person playing tennis feels threatened.
"The bird flies very low. If I'm not careful it can be dangerous and I can't concentrate on playing tennis. Can I hit the racket well?"
The overall length is 40 cm and the lifespan can reach 30 years in captivity and winter hardiness. Rose-ring parakeets fly in the sky as a group. This is a large type of parakeet, with a total length of 40 cm.
Residents nearby, “I just took the fur. It's pretty big, look at that."
Its tail feathers are more than twice the length of a human thumb. The size is obvious even when compared to small budgerigars.
In addition, it has a long lifespan and is said to live for 30 years in captivity.
Cafe Ikoyo manager Hideo Nakamura had a parrot commented, "Because it has a much longer lifespan than dogs and cats. It's hard if you don't consider the age. If you don't take good care of it, you'll get bitten later. Birds that are generally wild birds are still rough, right? ”
At dusk, rose-ringed parakeets flocked one after another in a wooded area a few hundred yards from the park. a group of small birds flew many times from the left side and stopped at the largest tree on the right side.
Countless parakeets gathered, perhaps because it was the relay point before returning to the nest.
Rose-ring parakeet perches are also in Tokyo.
The perching of the rose-ringed parakeet was confirmed in a residential area in Kita-ku, Tokyo. There are also those to Setagawa-ku and to Kawasaki.
There are also parakeets on the power lines next to the nest. The number reaches more than 50 tails.
Also, in Nerima-ku, Tokyo, nests have been confirmed in the bush in a residential area for at least three years.
These parrots are annoying and make dirt and noise, thereby disturbing the public.
However, all local governments have not considered it as dangerous or disturbing the community.
"We are still paying attention but so far it has not disturbed the community," said an official from the local government of my Setagaya
From the right side of the screen, one bird and another rose-ring parakeet. According to experts, rose-ringed parakeets love fruits.
Hiroshi Kawauchi, Representative of the Urban Bird Study Group, “Where they come from are pears and fruit. Even in Japan, one could say there is a possibility of spoiling the food considering the taste like that.
When the cherry blossoms bloom, they gather on the cherry tree and scatter the flowers, impairing the development of the cherry blossoms. so there are some aspects that are a little bit unwelcome.”
Rose-ringed parakeets can travel tens of kilometers in the morning in search of fruit and nuts to eat when they take off from their nests.
And in the evening, it is said that he will return to the nest again.
At present, it is said that there is no large-scale damage to agricultural products in Japan, but there is such damage around the location where there is a lot of fruit.
One woman complained of having dirt on her head. If you look closely, there is a lot of dirt on the playset and bench.
A man living around the garden also spoke as follows.
“When I come, I have to see the car. It must have fallen into the car and made a lot of noise," said the car owner.
In fact, when measuring the top of the bark under a tree, the noise level was 86.4 decibels. The volume is equivalent to when we are inside the pachinko room.
In the 1960s, rose-ringed parakeets began to be imported into Japan with the arrival of the pet boom.
In addition to the clarity of appearance, memorizing words and distinctive gestures is becoming popular, and they have been bred in many homes.
However, in the 1970s, dozens of birds escaped from pet stores and went wild.
Around 2000, the number of birds increased to 1,500, and until a few years ago, a massive nest was being built on the university campus of the Meguro Region, but the nests disappeared due to construction work.
The herd dispersed, and now there are three nests in Tokyo and Kanagawa.
A Kawasaki local government official said, “The park is not currently badly damaged, so we are not thinking about preventive measures.