Angela Merkel looks relaxed and smiling when interviewed by the Chief Editor of DW Max Hofmann at the chancellery, Berlin. Towards the end of her tenure, Merkel revealed in this interview her two biggest challenges, her disappointment, and that of her successor, Olaf Scholz.
"I'm not a machine, of course, but ... just a human being," Merkel said, when asked about her nickname as a "compromise machine" at her last EU leadership conference in October.
"I always hold such talks with an open mind," explains the woman who has served as chancellor for 16 years about her approach to policy making at international conferences.
Ummatimes - He also uses his approach when talking to a leader who doesn't share the same values. "However, I would also like to say that if someone has a fundamentally different perception of the world, then you still have to listen to them; in the end, if we don't listen to each other anymore, we will no longer find any solutions."

Germany must 'lead by example'

Merkel also emphasized the successes Germany has had during her tenure, such as maintaining strong ties with allies and initiating a halt to the use of coal in the country. Even so, he did not hesitate to discuss things that turned out to be a little beyond expectations. 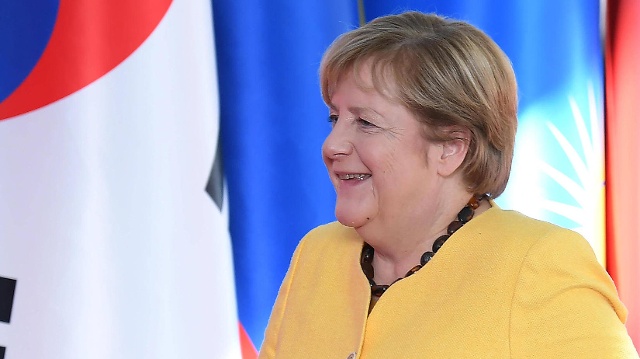 "In Germany it's not so bad compared to other countries," he said of the country's environmental record. "But we are also one of the leading industrialized nations," he continued, adding that with new technologies and scientific insights, Germany has a responsibility to "lead by example."
However, Merkel added, Germany's political system requires a leader to build consensus before new laws can be introduced. "We always need a majority for our decisions. This is an issue I discussed with climate activists time and time again. They said 'you have to do this now,' and I said 'but I still have to get a majority.' There are a lot of social expectations; there are a lot of concerns. I've always been committed to this, but I can't say that at the moment the results are satisfactory."
"We have to pay attention to scientific forecasts again, and that means sticking to 1.5 degrees Celsius (2.7 degrees Fahrenheit) of global warming. (COP26) Glasgow has produced some results. But it's still going too slowly from a point of view that people understand young," he said.

The Chancellor also expressed his wish for a different outcome in Afghanistan.
"We are of course very saddened by the fact that we didn't achieve what we wanted to do, which is to find an independent political order in Afghanistan, where girls can go to school, women can fulfill their wishes, and with lasting peace," Merkel said with a smile on her face. who looked gloomy for a moment.
"Often, I ask in discussions: why do so many young Afghans want to come here, while at the same time our men and women in uniform are placed there? ... Nevertheless, we have to accept it, despite our best intentions, we didn't manage to create the order we wanted to see there," Merkel said. "The blame for this does not lie with Germany alone. The Afghans, for their part, did not solve it either. This is very regrettable."

The two most challenging events

Asked about her biggest struggle as a leader, Merkel reflected: "The two events that I personally find the most challenging were, first, the large number of refugees who arrived here (in 2015), which I don't really like to call a 'crisis' – because humans are human. So, firstly, there's the pressure that we're facing from a lot of people who are fleeing Syria and its neighbors. And now there's the COVID-19 pandemic. Maybe it's a crisis where we see clearly how people are impacted directly, where human life is full of uncertainty. For me, that is the biggest challenge."
Furthermore, the chancellor said the EU still had to be able to find a "common system for dealing with asylum and migration" and create a "self-regulating balance between the country of origin and the country where refugees first arrived," to better help refugees and fight the root causes why. people run away.
When asked to look back at his famous 2015 quote, when Merkel said "Wir schaffen das," which means, "We can do this," he admitted that "not everything goes exactly the way it should." But Merkel considered it a huge success to see how many refugees Germany received. Today many of the refugees in Germany live and work permanently there.
"Yes, we did it. But 'we' here, I mean a large number of people in Germany helping to get it done: a lot of mayors, a lot of volunteers," and many others, Merkel said.

'A reassuring signal in a turbulent world'

Smiling, Merkel said it was natural to take her successor Olaf Scholz with her at the recent G20 meeting in Rome. As her finance minister, Scholz will always accompany Merkel.
However, Merkel took Scholz to many closed-door meetings as a sign of continuity and harmony. Despite the fact that they belong to a different political party — Scholz is from the centre-left Social Democrats — Merkel appears to have complete confidence in her successor.
"I think it's an important signal for Olaf Scholz to be a part of all bilateral discussions. That way, I can say, sitting here is the person you will probably talk to at the next meeting, in the role of head of the German government," he said. Merkel. "I feel it's important."
The 67-year-old added that it was important to leave the impression that "the current chancellor and the next chancellor have a good working relationship."
"It sends a reassuring signal in a somewhat turbulent world. I think it's the right thing to do."
Finally, Merkel was asked how she felt when she later saw someone else sitting in her chair after she finished 16 years in office.
"You'll get used to it," Merkel said, smiling again.