A German Navy frigate sent to the Indo-Pacific region stopped in Tokyo on November 5, 2021. This is the first time this has happened since 20 years ago a German military ship re-entered Japan.
Ummatimes - The purpose of the presence of the German frigate Bayern is to promote and strengthen cooperative relations with Japan in terms of security.
The German Navy frigate "Bayern" departed from Germany in August 2021 and conducted joint training with the Japan Maritime Self-Defense Forces in the Pacific Ocean and other areas, and stopped at the "Tokyo International Cruise Terminal" in Koto-ku, Tokyo, Friday (5 /11/2021) afternoon.
According to the German Navy, the "Bavarian" will stay in Tokyo until November 12, 2021. 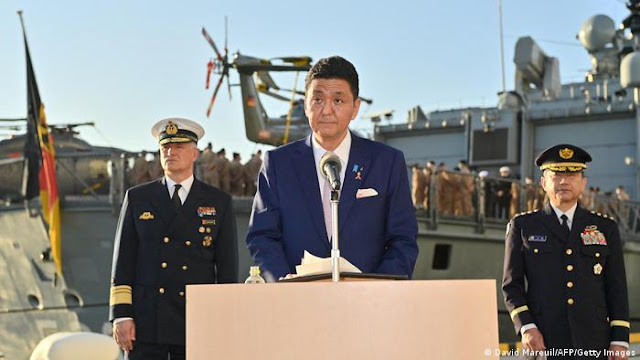 After that it plans to participate in joint training involving 20 ships from five countries, including Japan and the United States.
"The Indo-Pacific region is now one of the most strategic and important areas, which can help keep sea transportation routes free and open," said Bundeswehr General Manager Zorn.
He stressed the importance of strengthening cooperation with Japan.
Last year, Germany drafted guidelines for diplomacy and security in the Indo-Pacific region, and announced policies to strengthen ties with Japan and other countries amid growing concerns about China's move to sea.
This is the first time in about 20 years a German Navy ship has visited Japan, and aims to promote cooperation with Japan on security matters and to demonstrate its presence in the Asian region.
Prior to calling Tokyo, "Bavarian" conducted joint training with the Maritime Self-Defense Force escort ship "Samidare" in the sea south of the Kanto region from November 4 to 5, 2021.
The Japan Maritime Self-Defense Force said, "We have strengthened cooperation towards the realization of a free and open Indo-Pacific."
This is the third training between the "Bavarian" and Japanese Maritime Self-Defense Force escort ships, following those conducted in August in the Gulf of Aden off the coast of Somalia, Africa, and in September the following September in the eastern Indian Ocean.
Defense Minister Nobuo Kishi visited the terminal and checked with the Inspector General of the Federal Army, the top group of the German uniform group.
Afterwards Minister Kishi told reporters, "This call is a broad indication to the international community of Germany's strong determination to actively contribute to peace and stability in the Indo-Pacific region, and we warmly welcome it."
"Germany is a partner who shares the same basic values. Defense cooperation between the two countries is the cornerstone of maintaining and strengthening a free and open Indo-Pacific, and we want to use the port of call as a foothold for further efforts and joint development. We need to further promote defense cooperation between the two countries."
Since Chancellor Angela Merkel's inauguration, Germany has developed China-centered Asian diplomacy, including visiting China 12 times.
However, there are growing concerns at home and abroad about China's displacement into the oceans, the human rights situation in the Xinjiang Uygur Autonomous Region and Hong Kong, and its over-reliance on China economically.
For this reason, the German government plans to move away from its Asian policy, which has largely focused on China, and diversify its diplomatic stance.
Last September, Merkel drafted diplomatic, economic and security guidelines for the Indo-Pacific region and positioned the region to become more politically and economically important, with a "rules-based order" and "multilateralism."
"We aim to strengthen ties with Japan and Australia under existing principles."
It was not unusual for Germany, which had no foreign territory and had shown a cautious military attitude, to send ships to this area.
After calling Tokyo, Bayern is scheduled to pass through South Korea and then in December via the South China Sea, where China is promoting its military base.
On the other hand, China is Germany's biggest trading partner and wants to avoid conflict.
As a result "Bavarian" will not pass through the Taiwan Strait and initially consulted with the Chinese side to call Shanghai which shows a strong attitude towards China.
A German Foreign Ministry spokesman said in September that "the Chinese side decided they didn't want to call at the port and we agreed."
"Obviously the Chinese side refused to call at the port, I succeeded. And China opposed the 'Bayern' plan to pass through the South China Sea.
"We are paying attention to related reports. Cooperation including the defense sector of the countries concerned is between countries in the region. This must contribute to the promotion of mutual trust, regional peace and stability, and the promotion of development, and not the other way around," said the spokesman. Speaking at the Chinese Foreign Ministry, Wang Wenbin at a press conference on Friday (11/5/2021) regarding the call of the German frigate to Japan.
Regarding the "Bavarian" port visit to Japan, Professor Yoko Iwama of the National Graduate Institute for Policy Studies said, "The defense cooperation between Japan and Germany is a few steps behind between Japan and Britain, and between Japan and France."
"I've been finding out bit by bit lately, and it's symbolic that the 'Bavarians' are coming to Tokyo this time," he said.
"Merkel's diplomacy emphasizes relations with China and Russia. I think it is unlikely that the Merkel administration will be on the side of being able to fully confront China."
He said that the German side had initially consulted with China.
"Bavarian" for a port call to China, and said that there was an intention of Chancellor Angela Merkel, who has stressed economic ties with China.
On that basis, he analyzed Germany's position.
"I hate conflict while advocating cooperation with partners who share values, such as Japan, but prefer to exist to promote dialogue," he said.
In addition, Professor Iwama said that in December, the centre-left Social Democratic Party, Schortz, would replace Chancellor Angela Merkel as the new prime minister, and the next government would be sworn in.
"With the new leader of Germany, it will be more active than before in terms of cooperation between countries with democratic values," added Iwama.