The German government will donate 25 million euros to the United Nations Agency for Palestinian Refugees (UNRWA). The funds will be allocated to Palestinians living in the Gaza Strip and in refugee camps in Lebanon.
"On behalf of UNRWA, I would like to thank Germany for its generous unwavering support after many years to UNRWA and the Palestinian refugees," said UNRWA Partnership Head Karim Amer.
Ummatimes - According to him, the support given over the years is proof that UNRWA and Palestinian refugees can rely on Germany in difficult times. "Germany will remain a reliable partner for UNRWA and its essential work to improve the living conditions of Palestinian refugees. Supporting dignified living conditions in Gaza remains a top priority for the German Government," said acting Germany's chief diplomatic officer in Ramallah, Michael Herold.
Of the 25 million euros donated by Germany, 10 million of which will be used to continue the construction of the Nahr El-Bared refugee camp in Lebanon. The camp was destroyed in 2007 due to fighting. Nearly 21,000 Palestinian refugees are waiting to return to Nahr El-Bared. With German help, some 192 Palestinian families were able to return there. 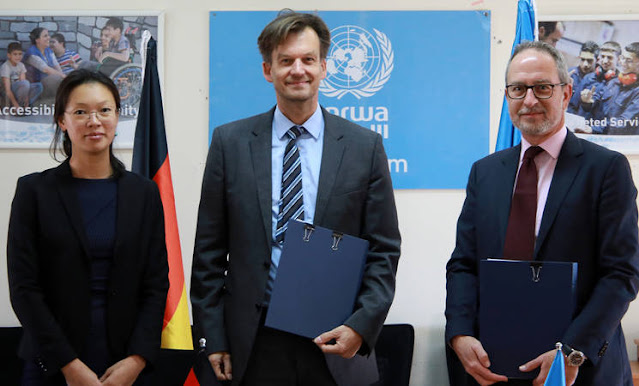 According to Karim Amer, so far Germany has contributed 56 million euros to rebuild Nahr El-Bared. Germany was UNRWA's biggest contributor last year with 182 million euros in aid. Berlin is expected to be the second largest donor in 2021, with a total donation of 127 million euros.
Last week, the European Union renewed its commitment to assist UNRWA. Both parties have signed a joint declaration regarding this matter for the period 2021-2024. The declaration was signed by EU Foreign Policy Chief Josep Borrell and UNRWA Commissioner General Philippe Lazzarini. The renewal of the agreement marks 50 years of partnership between the European Union and UNRWA.
In the declaration, the EU commits to support UNRWA politically and in securing multi-year financial resources. This is to ensure that UNRWA carries out its mandate in providing essential services to Palestinian refugees.
“UNRWA has played an important role in providing vital services to millions of Palestinian refugees in its five areas of operation. The European Union is determined to continue to support UNRWA, both politically and financially, including by providing long-term reliability," Borrell said, quoted by the Palestinian news agency, WAFA, on Thursday (18/11).
According to him, support for UNRWA is a key element in the EU's strategy to contribute to the promotion of security, stability and development in the region. "It also helps maintain prospects for sustainable peace between Israel and the Palestinians," he said.