Halimah Yacob is Singapore's first female president. Starting with being the first woman to become the Speaker of the Singapore Parliament, in 2017 she officially became the president of Singapore. This 1954-born woman was also the first Malay woman to be elected to the Singapore Parliament when she won a seat in Jurong GRC.
Ummatimes - As a working mother and experienced in trade unions, Halimah Yacob has fought for the interests of women and workers. Prime Minister Lee Hsien Loong said Halimah Yacob spoke "in a practical and compassionate voice, helping us to shape effective policies with a human touch". Quoting from Swhf.sg, she is also the longest-serving Muslim female politician in the ruling People's Action Party.
However, Halimah comes from a humble background. She spent her junior high school years at the Singapore Chinese Girls' School, a school for girls who are mostly ethnic Chinese. But at that time Halimah was almost expelled or dropped out of school because she spent more time helping her mother sell so that at that time the school gave her a warning. 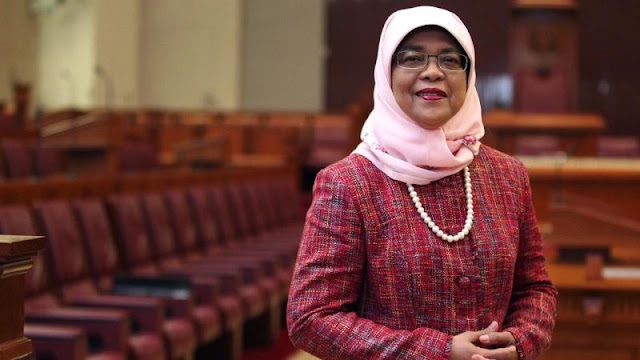 He majored in law at the University of Singapore on a MUIS scholarship and graduated in 1978 with an honors degree. In 2001, Halimah obtained her Master of Law degree from NUS.
After graduating in 1987, she joined the National Trade Union Congress and various directors of the secretariat for women's development and its legal services before becoming deputy secretary general of the NTUC. Halimah was the first Singaporean to be elected to the governing body of the International Labor Organization.
Halimah has served on various boards including the Housing and Development Council, the Tripartite Alliance on Fair Employment Practices, the Tripartite Working Group on Increasing Employment Options for Women and Climbing Sense.
On 23 January 2013, the National Social Services Council appointed him as the first advisor to take advantage of his "broad and deep understanding of the basic issues, along with the practical means".
Prior to becoming a speaker, Halimah served as minister of state at the Ministry of Social Affairs and Family Development. He is on the PAP's central executive committee.
The mother of five is very vocal on social issues ranging from training for older and less skilled workers to caring for the elderly and mentally ill. Halimah supports flexible work arrangements and family care leave to improve work-life balance. She also fought successfully for equal medical benefits for female civil servants.
In 2017, Halimah Yacob resigned from her position as Speaker of the DPR and MP to contest the presidential election of Singapore. The election was declared a walkover and in September she was sworn in as Singapore's eighth president and the first female president there.