Hundreds of migrants held out near Belarus's border with Poland on Tuesday in chilly evening temperatures as Poland's prime minister visited the border. Officials warned tensions could escalate in the next few days.
Ummatimes - Poland has accused Belarus of trying to spark a major confrontation by pushing migrants across to Poland and the European Union (EU). Videos show hundreds of people walking towards the Polish border near the village of Kuznica and some trying to break through the fence using shovels and other tools.
Polish police video footage on Tuesday showed a tent and bonfire at migrants near a barbed wire fence on the Belarus side of the border. The Polish Border Guard said about 800 people were camping on the Belarusian side of the fence, part of a group of 4,000 migrants there and near the forest. 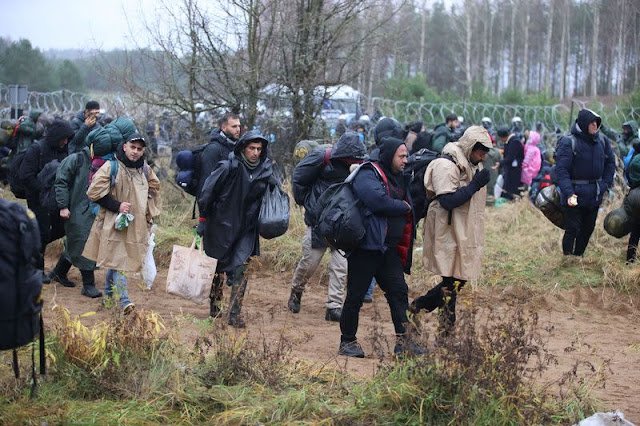 A spokesman for the Polish special forces estimates the number of migrants could be as high as 12,000 in Belarus. Polish authorities closed the official border crossing with Belarus at 06.00 am (13.00 WIB) on Tuesday near the location where thousands of migrants had tried to cross the day before.
Poland said it had deployed additional troops, border guards and police. Neighboring Lithuania said it was likely to impose a state of emergency on its border with Belarus. Polish police said on Twitter Tuesday that conditions were calm that night, despite a stone being thrown at a police car. , after the confrontation on Monday.
A Polish official added that tensions could escalate in the next few days and that additional international assistance would be welcome if that happened.
Polish Deputy Foreign Minister Pawel Jablonski via privately owned Radio Zet reiterated that at this time Poland does not need additional assistance from the EU border guard, Frontex. EU ambassadors to the UN are expected to meet to discuss the tense situation on Tuesday, the PAP news agency quoted Poland's ambassador to the UN as saying. Belarus' state news agency Belta quoted the interior minister as reporting that none of the migrants had violated the law.