In 2 Week of Burning Cases on Trains, Japanese Police Strengthen Security at Stations

In the span of one week, arson cases on high-speed trains occurred twice in Japan.
Ummatimes - The first incident occurred last October 31 near the Kokuryo station on the Tokyo Keio line, and Monday (8/11/2021) a similar incident occurred near the Shin Yatsushiro Kyushu Shinkansen station.
How are the security measures taken by the train after these two burning incidents in the train carriages?
Previously, before and during the Olympics/Paralympics in Japan, strict security was carried out at several major train stations in Japan.
Specifically for passengers on the Shinkansen in Tokyo, suspicious luggage is checked. 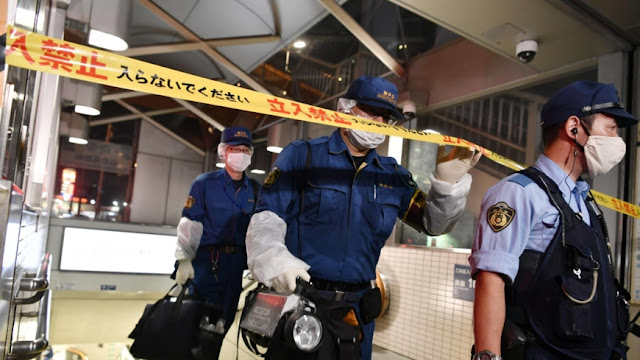 In addition, sniffer dogs are also deployed that can sniff out dangerous objects such as firearms, hazardous materials in suitcases such as explosive gasoline and so on.
Likewise, CCTV is not only installed on the roofs of various surveillance angles, small cameras are also installed on several police officers which are directly connected to the control station.
So that wherever the special police move, it can be known directly (live) the situation around them.
The use of AI (Artificial Intelligent) in the form of cameras and processing the data of people who are "caught" in the image are also carried out, so that all people's movements can be known beforehand based on the results of the AI ​​analysis.
So what about after the Olympics/Paralympics are done?
"Frankly, everything was abolished because it cost a lot of money, in the midst of the corona pandemic the train company suffered a lot of losses," said a source from Tribunnews.com, Monday (11/8/2021).
He gave an example of what was done by the Tokyo JR Tokai.
Security is carried out using AI to identify and detect the movements of suspicious people around the train station.
How is JR Kyushu after yesterday's fire in the 3rd carriage of the Kyushu Shinkansen?
"We haven't decided what to do next regarding better security in the future," he said.
In Tokyo the subway or Tokyo Metro also has many users.
"It is difficult at this time to monitor one by one passenger. We are still thinking about the best way for this security surveillance so that all passengers are safe and safe on the trip," said an officer to Tribunnews.com.
Meanwhile, all train companies still use security cameras (CCTV) at various stations to monitor the various movements of their visitors.
Yesterday the Japanese police began to move by deploying orders to strengthen security around train stations in Japan after the case of burning in train cars.
"We are trying to cooperate better with the railways in Japan so that they can participate in controlling all the movements of prospective passengers in the future," said a police source, Tribunnews.com, Monday (11/8/2021).