Indian Prime Minister Narendra Modi has announced the repeal of three controversial agricultural laws after a year of protests.
Ummatimes - Thousands of farmers have camped on the Delhi border since November last year and dozens of them have died from illness amid the heat, cold and Covid.
Farmers said they objected to the law because it would allow private players to enter agriculture and it would hurt their incomes.
Friday's surprise announcement marked a major change as the government had not taken the initiative to talk to farmers in recent months.
Previously a number of ministers had insisted that the law was good for farmers and would not be repealed
The agricultural unions saw this change in government attitude as a major victory. 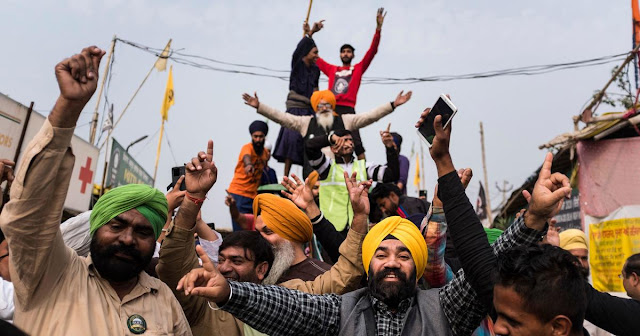 But experts say the upcoming state elections in Punjab and Uttar Pradesh - moreover both have large farmer bases - may have influenced the decision.
The announcement on Friday morning came as Sikhs - the dominant community in Punjab - were celebrating the birthday of Guru Nanak, the founder of Sikhism.
In his nationally televised address, Modi said the agricultural law was basically meant to strengthen smallholders.
"However, despite several attempts to explain the benefits to farmers, we failed to make it happen. Thus, the government has decided to repeal three agricultural laws," he added.

How did the farmers react?

Rakesh Tikait, one of the most prominent peasant leaders, said they would only stop the protest movement once the government repealed the law in the winter session of parliamentary meetings.
Other farmer leaders said they also needed additional promises from the government around price certainty for their crops to end the protests.
The opposition party welcomed the decision. The leader of the Congress Party, Rahul Gandhi, said the repeal of the law was a victory against injustice.
Politicians from the ruling BJP party said the decision to repeal the law had nothing to do with the election and the decision was taken to end a wave of protests. The party has not said whether it has plans to reinstate the law in another form.
Narendra Modi's decision to repeal the controversial agriculture law was a strategic and political move and a belated acknowledgment of the government's haste and arrogance.
The law has sparked an unprecedented storm of protests in the states of Punjab and Uttar Pradesh and poses a real challenge to Modi.
They have mobilized farmers and civil society in predominantly Sikh Punjab and spread to parts of Uttar Pradesh, a state that is due to hold decisive elections early next year.
The BJP, not anticipating such a backlash, has gone to great lengths to appease the Sikhs.
Much of his executive meeting earlier this month was devoted to easing public sentiment: increasing agricultural budgets and crop prices, reopening historic corridors to one of Pakistan's holiest Sikh sites, and new investigations into convicting people guilty of anti-Sikh riots in Delhi in 1984. .
The government is clearly uneasy about the growing resistance of the Sikh community to the law.
Moreover, history holds a bleak lesson in Punjab, a strategic border country: a bloody separatist movement in the 1980s sparked by the displeasure of the Sikh community.
By repealing the law, Mr Modi hopes to regain the trust of farmers in general, and especially the Sikh community. This will also increase the chances of BJP in the Election.
For those who support the law, this is again a useful lesson that good economic considerations often result in bad political decisions.

What caused the repeal of the law?

Samyukta Kisan Morcha (SKM), an umbrella group of about 40 farmers' unions, has refused to step down despite pressure from the government to end their protests.
Farmers have been blocking highways to Delhi despite the harsh winters and summers and even through the deadly wave of Covid.
They called for strikes across the country and dozens of them even died from cold, heat and Covid.
The government initially engaged in negotiations with them and offered to delay the law for two years.
But after the peasants rejected their offer, the authorities finally backed out, preferring to leave with a wait-and-see attitude.
But there have been two important events in recent months.
First, the son of a federal minister is suspected of deliberately crashing his car into a group of protesting farmers in Lakhimpur in Uttar Pradesh in early October.
He denied the accusations, but was arrested. Eight people, including four farmers and a journalist, were killed in the incident, which sparked outrage across the country
Second, PM Modi's Bharatiya Janata Party (BJP) faces strong regional parties in the upcoming elections in Punjab, Uttar Pradesh and Uttarakhand and the government knows that angry farmers will ruin the BJP's chances of winning the crucial election.

What does the rejected Agriculture Law offer?

The package of laws loosens rules around the sale, pricing and storage of agricultural products. The old rules have protected Indian farmers from the free market for decades.
One of the biggest changes is that farmers are allowed to sell their produce at market prices directly to private players – namely agricultural businesses, supermarket chains and online wholesalers.
Most Indian farmers today sell most of their produce in government-controlled wholesale markets or mandis at a guaranteed base price (also known as minimum support price or MSP).
The new law also allows private buyers to stockpile essential commodities for future sales, which so far only authorized agents appointed by the government have been able to do.
The regulation also outlines the rules for contract farming, in which farmers adjust their production to suit the demands of specific buyers.
The agricultural reforms, at least on paper, give farmers the option of selling outside of these so-called "bath systems."
But protesters say the law will weaken farmers and allow private players to control their fate.
They say that MSP has kept many farmers alive and without it, many of them will struggle to survive.
They continued, India's strict laws around the sale and use of agricultural land and high subsidies have protected farmers from market forces for decades so there is no need to change them.
But the government argues that it is time to make farming profitable even for small farmers and the new law will achieve just that.