Israel Closes Borders from All Countries Affected by Omicron Variant

Israel Closes Borders from All Countries Affected by Omicron Variant

Israel became the first country to ban all foreigners from entering the country amid the emergence of a new variant of Omicron. Israel took a different path than several countries, including the United States and the European Union, which only limited the ban to a number of African countries.
Ummatimes - On Saturday (11/27/2021), Israeli Prime Minister Naftali Bennett said that the ban would last for the next 14 days, reported by Al Jazeera.
The government hopes that during the shutdown period they can obtain more information about the variant, which was first detected in Africa. The World Health Organization (WHO) categorizes Omicron as a variant of concern, which means dangerous and threatening.
"Our working hypothesis is that this variant already exists in almost every country. The vaccine (against the Omicron variant) is effective, although we don't know to what extent yet," said Interior Minister Ayelet Shaked.

Israel has closed its borders to African countries since Friday (11/26/2021). The complete ban will take effect from Sunday (11/28/2021) midnight local time.
Al Jazeera's correspondent from West Jerusalem, Harry Fawcett, called the restrictions a strict policy. The policy is also inversely proportional to the opening for foreign tourists which had taken effect in early November. 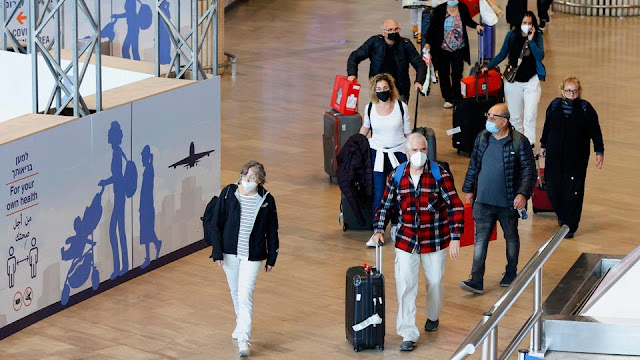 “It was the result of an emergency cabinet meeting late at night. Naftali Bennett's brief is that Israel needs to act very quickly in the midst of all this uncertainty and not risk all the progress that has been made against COVID-19," Fawcett said.
The policy also requires vaccinations and mandatory quarantine for Israeli citizens returning from abroad. Those who have been vaccinated should only be quarantined for three days and those who have not been vaccinated should be quarantined for seven days, Fawcett said.
"If (new Israelis) return from one of the African countries that are on the red list, they must enter a government quarantine hotel, until the test result is negative," he added.

Separately, Bennett said counterterrorism agency Shin Bet's phone tracking technology would be used to find operators of new variants, in order to curb transmission to others.
The technology works by matching the location of the virus carrier with other nearby phones, to determine who was in close contact.
Israel's Supreme Court this year limited the scope of its use after civil rights groups raised a challenge over privacy concerns. The Shin Bet technology has been shut down since March 2020.
Israel has so far confirmed one case of Omicron and seven suspected cases. However, health authorities did not specify whether the confirmed cases affected people who had been vaccinated or not. The new information is that three of the seven suspected cases have been fully vaccinated.

3. Omicron variants have been detected in Europe and Australia

Omicron variants have also been detected in Belgium, Botswana, Hong Kong, Italy, Germany and the UK. Recently, Australia also detected two cases of Omicron after the citizen traveled from Africa.
"Two positive asymptomatic cases were detected. Both have been isolated in special locations and both have also been vaccinated," the Australian health authority said in a statement.
About 57 percent of Israel's 9.4 million population has been fully vaccinated, according to the health ministry. Israel has also started a third dose vaccination campaign with Pfizer-BioNTech to its citizens.
Israel has recorded 1.3 million positive cases of COVID-19 and more than 8,000 people have died since the pandemic.