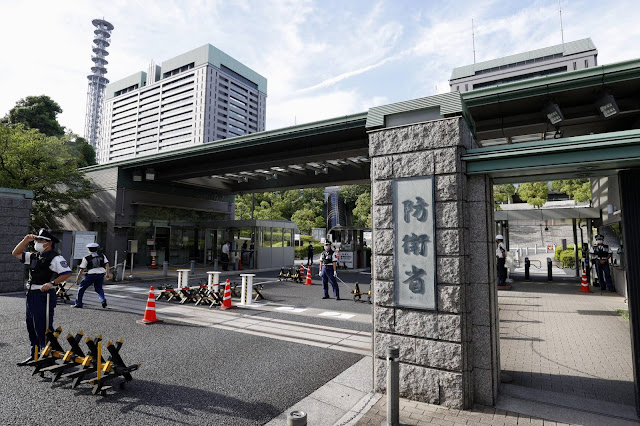 This means that Japan's defense budget will be one of the largest in the world in the future. Meanwhile, Russia has a defense budget of around 61.7 billion dollars.
The US Donald Trump administration has in the past demanded allies such as NATO countries by 2020 to increase defense spending to 2 percent or more of GDP.
While showing a confrontational attitude with China, it is due to a desire to reduce the cost of deploying US military overseas on a "US first" basis.
Eleven of the 30 member states of NATO (North Atlantic Military Organization) have reached that level, but Germany is only 1.56% and Italy 1.39%.
Generally, budget requests are made by collecting the project costs planned by the respective ministries and agencies.
But for the Ministry of Defense, suddenly defense spending more than doubled or botamochi (Ed.: easy luck).
"At least next year the defense budget will not increase sharply. Next year, we will review the next medium-term defense capability development plan (2024 to 5 years) and the Outline of the Defense Plan," said a senior Ministry of Defense official when asked how to use it.
It was almost impossible to expand the scale of the Self-Defense Forces even if defense spending increased sharply.
The Self-Defense Forces had a hard time recruiting members, and even now the number of members was dwindling.
According to the Ministry of Defence's Establishment Act, the number of SDF personnel is 247,154, but the "budgetary capacity" for the year is reduced to 246,748, given that it is impossible to gather that many.
However, the actual number of members at the end of last year was 227,442, 19,306 lower than the budget capacity.
"While capacity continues to decline, from 2018 we expanded the recruitment of general members to 18 years old and under 33 years old," he said.
When a 32 year old is recruited and joins the army as a 2nd class soldier, the members who joined at 18 the previous year have been promoted to 1st class soldier.
Thus, senior guidance 13 years younger must accept it as it is.
Emotionally difficult things might happen, but the Self-Defense Forces had no choice but to desperately match the number of members.
Specifically, the Maritime Self-Defense Force has a legal capacity of 45,329, while the current number of members is 42,850, or less than 2,479.
Since each crew member has a fixed base, it can be dangerous to leave port with less than a fixed number.
For this reason, the conventional 2,000 tonne class small escort ships have a fixed number of 120 people, but the replacement escort ships have been increased in size to 3,900 tons and the capacity reduced to 90 people.
"In addition, in order to increase the number of female applicants, we are promoting the appointment of female executives (officers) and becoming commanders of the "1st Guards Fleet" (1 light aircraft carrier, 3 escort ships) of the Group's "First Guards" (Yokosuka). And a lieutenant (colonel) has also been appointed,"
As a result of the enactment of security laws, recruiting members will be even more difficult.
Meanwhile, the purchase of military equipment will increase if the defense budget is doubled.
In July 2014 during the Abe administration, the Cabinet changed the interpretation of the Constitution and allowed the exercise of the right of collective self-defense, which made it even more difficult to recruit SDF personnel.
According to a poll conducted by the Cabinet Office, in January 2015, 70.4% of respondents answered “yes” or agreed if someone close to us wanted to become a member of the SDF. The opposite was 23.0%.
However, in the 2018 survey, “agree” was 62.4%, down 8%, and “disagree” was 29.4%, up 6.4%.
When asked "Do you think there is a danger that Japan will go to war or become involved in a war?", the number of people who answered "dangerous" increased from 75.5% to 85.5%, and "not dangerous".
The number of people who thought that it was 19.8% has decreased to 10.7%.
It is only natural that the number of people who oppose their children's participation in the Self-Defense Forces will increase as the government and the ruling party raise a sense of crisis about North Korea's missile launches and China's advances into the seas with today's purchase of advanced anti-missile equipment. Or anticipate the dangers of a neighboring country's ballistic missile launch.