The governments of Saudi Arabia and Jordan condemned the visit of Israeli President Isaac Herzog to the Ibrahimi Mosque in Hebron, West Bank to celebrate one of the Jewish holidays, Hanukkah.
Ummatimes - In a statement Tuesday, Jordan's Foreign Ministry spokesman Haitham Abu Al-Foul said Herzog's visit was a violation of international law. He also said the move could encourage extremism.
"The visit is an unjustified provocation against the sentiments of Muslims," ​​Al-Foul said in a statement.
Meanwhile, the Saudi Arabian Foreign Ministry also said Herzog's visit was a provocative act. It called on the international community to bear responsibility in stopping Israel from Muslim holy places. 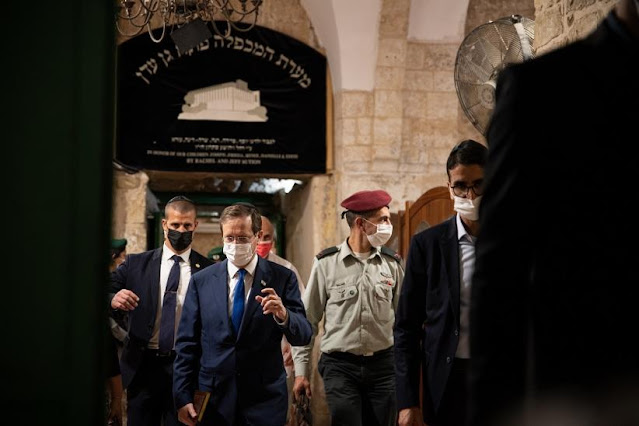 According to reports, Herzog forced his way into the Ibrahimi Mosque on Sunday (28/11) to participate in a Jewish candlelight ceremony. He was also accompanied by a large number of Israeli police forces and Jewish settlers in Hebron.
Sheikh Hefthi Abu Sneina, head of the Ibrahimi Mosque, said Israeli forces closed the mosque and prevented Palestinian worshipers from reaching the site.
After the 1994 massacre of 29 Palestinian worshipers inside a mosque by an extremist Jewish settler, Baruch Goldstein, Israeli authorities divided the mosque complex between Muslim and Jewish worshipers.
The UNESCO World Heritage Committee decided in July 2017 to include the Ibrahimi Mosque and the old city of Hebron on the World Heritage List. Hebron is noted to be home to about 160,000 Palestinian Muslims and about 500 Jewish settlers.