Thousands of people took to the streets in Australian cities on Saturday to oppose mandatory Covid-19 vaccinations. Meanwhile, smaller crowds rallied in support of mandatory vaccination in Australia, one of the countries with the highest vaccination rates in the world.
Ummatimes - Protesters also staged their rallies in Sydney, Brisbane and other cities. There are no reports that the action caused chaos.
Anti-vaccination demonstrations have continued for weeks in Australia, sometimes with violence. A counter-demonstration was staged by several hundred people in Melbourne and organized by the anti-racism movement group, which calls for the public to be vaccinated.
As of 19 November, nearly 85 per cent of Australians over the age of 16 had been fully vaccinated against Covid-19. While vaccination across the country is voluntary, a number of states and territories have made it mandatory to vaccinate citizens working in various fields. 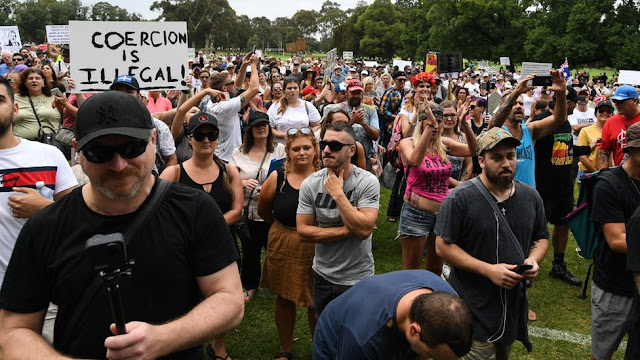 People who have not been vaccinated are also barred from various activities, such as eating at restaurants and attending concerts, in those areas.
Despite being hit by an outbreak of the Delta variant until the lockdown was implemented in Sydney and Melbourne, Australia has so far recorded relatively low Covid-19 numbers. According to World Health Organization (WHO) data, Australia has 760 cases of Covid-19 and 7.5 deaths per 100,000 people, far below many developed countries.
In Great Britain, for example, such figures are recorded at more than 14,000 cases and 211 deaths per 100,000 people.