'No work until vaccinated' order is controversial for US workers

'No work until vaccinated' order is controversial for US workers

The United States (US) may play an important role in developing the world's first Covid-19 vaccine. However, the US is now facing a big dilemma regarding the use of vaccines, do people have to get them?
Ummatimes - Like restaurant bans, sporting stoppages and people being forced to lose their jobs, vaccination orders have become a huge problem - especially in recent weeks in New York.
What happens there too could have an impact on the rest of the world as vaccinations increase, and other countries are still wondering how best to continue fighting the pandemic.

"I'm not completely against vaccines," said Crisleidy Castillo.
"I'm just saying no now, because I'm breastfeeding."
The 27-year-old special education teacher used to work at a school in New York City. However, a few weeks ago, he and thousands of other Ministry of Education staff who had not received the first dose of vaccine, 'got' unpaid leave. 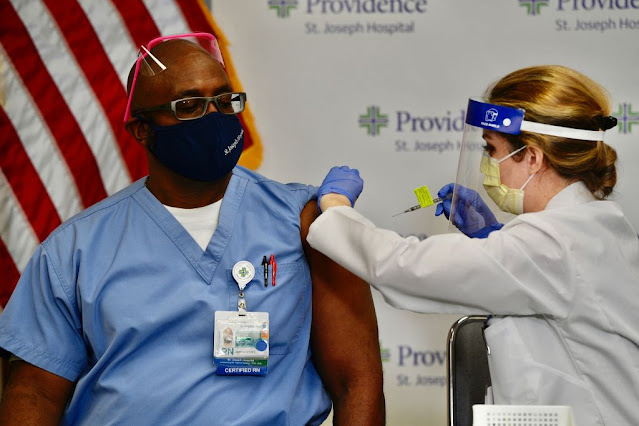 Vaccination orders have now been applied to all New York City government employees, with the choice of having them vaccinated or at risk of being laid off.
"I don't think vaccines are safe because there isn't enough research on it," Crisleidy added. In fact, the Covid vaccines approved in the US have passed medical tests and have also been approved in dozens of other countries.
Crisleidy is now unemployed, without pay. He said that if he accepted a job offer from a private school, his salary would be cut by 60% and he would lose his health insurance from his previous job.
Crisleidy requested an exemption from the vaccination order, but his initial request and appeal were denied.
Exceptions are only allowed if there is a dispensation by the US Centers for Disease Control and Prevention (CDC).
The CDC itself recommends that breastfeeding mothers should be vaccinated and says there is no medical evidence that the vaccine is not safe for them.
However, Crisleidy still doesn't want to be vaccinated at this point: "Basically I was punished just because I chose my personal decision. It's not that I'm selfish, I just want to protect my daughter."
The Ministry of Education said: "Vaccination is our strongest tool in the fight against Covid-19. This decision is right in the eyes of the law and will protect our students and staff."
In a separate legal case regarding vaccination orders, Department of Education lawyers ruled that people had no right to "teach unvaccinated children against dangerous infectious diseases. Vaccination orders are not only a rational public health measure, they are essential."

Some 10,000 workers in New York are now in the same situation as Crisleidy. However, the city government said there had been a spike in the number of workers who had been injected, after learning of a vaccination order.
The number of emergency medical workers who have been vaccinated jumped from 74% to 87%, ahead of the rule change. Meanwhile in the Fire Department the number increased from 64% to 77%.
Despite union warnings of possible staff shortages as unvaccinated people are given unpaid leave, New York Mayor Bill de Blasio said there had been no disruption to citizen services.
"Here's my message: Every mayor in America, every governor in America, and every business CEO in America enforces a vaccination order and you're going to make us all safer and can help end the Covid era for everyone, once and for all."

There was a resident who did not want the vaccination order to be implemented, namely Douglas Kariman.
He also felt the impact of the vaccination order imposed by the New York state government for all medical workers.
"I'm not an anti-vaccine person. I'm not against any available vaccines," he said.
"I'm not one of those people who say the virus is fake. I've proved it and I've witnessed deaths from the virus."
Douglas lives in Lancaster, in the western state of New York. She works as a nurse in a local intensive care unit.
His job is in danger. On the other hand, the judge weighed in on a lawsuit filed by a fellow medical worker, asking authorities to consider a religious exemption from statewide vaccination orders.
He has the principle of not wanting anything to be forced into him.
"Just as they say they have studied it, and I believe, neither have long-term studies of it."
He also expressed concern about the new vaccine, Douglas, who claims to be a Baptist Christian, expressed his objection to vaccinations based on the use of fetal cells.
The cells are said to have come from a fetus that was aborted decades ago. However, there are no fetal cells in any vaccines and many major religious groups against abortion, such as the Catholic Church, still recommend vaccination.
If the legal application for an exemption due to religious background fails to be met, it is likely that Douglas will not be able to work in New York state again.
"I have a disabled wife, she doesn't work. So it's all my responsibility."
"If I lose my job, I can lose everything, that's my livelihood."
In order to keep working, Douglas had only one choice. He had to travel about an hour and a half to the neighboring state of Pennsylvania to work. Currently Pennsylvania does not have a vaccination order for medical workers.
"Actually I was thinking of moving after all this. I hate to say this because my family and my parents are here, but what else can I do?"
New York state governor Kathy Hochul endorsed the vaccination order policy saying: "We believe the strategy will work and have a dramatic effect on protecting citizens, especially healthcare workers."
Meanwhile, state attorneys have repeatedly opposed exceptions due to considerations of any religion to vaccination orders.

Dr. Clavin Sun, a doctor in the emergency department of a New York City hospital, has a different opinion about vaccines and vaccination orders.
He said, "At the height of the pandemic, I saw quite a lot. It was two months that would give me nightmares for the rest of my life."
"That's what it feels like," he added.
He also admitted that he was not worried about the assumption that vaccination could carry a greater risk than contracting Covid.
"The risks are not worth the benefits of the vaccine," he said.
"All the serious illnesses I've seen [at work] in people who have Covid, it's because they're all not vaccinated." 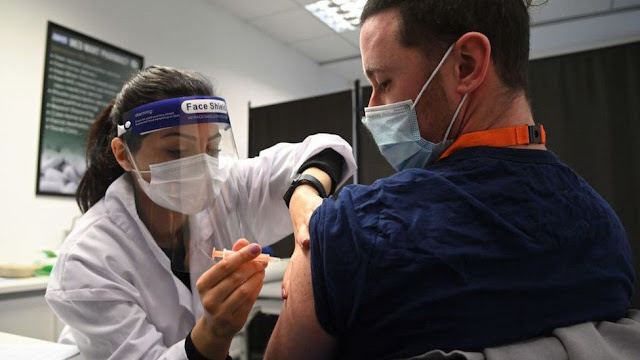 Based on that, Dr Sun believes that the government has the right to use the vaccination order.
"I think it's unfortunate that we have to get to the point where there is a vaccination order because from a medical point of view we always want to guide patients to choose to be vaccinated for the good of their community and their loved ones," he said.
Just as people should wear seat belts or shouldn't text on their cell phones while driving, Dr Sun believes that "we should give up a little freedom for the sake of safety" and in the case of the Covid pandemic that means "fulfilling vaccination orders to ensure healthcare systems are not overwhelmed and there is free space for vulnerable patients".
According to him, other regions could also follow New York: "We can show the world that vaccination orders are not as bad as people fear."
Many places around the world also have strict rules regarding Covid vaccination.
In Europe, Latvia decided to allow companies to fire workers who disagreed with vaccinations or worked from home.
In Asia, some parts of Indonesia require vaccination for all citizens and Costa Rica became one of the first Latin American countries to require public servants to be vaccinated.
As tens of thousands of people around the world continue to die from Covid-19 every week, more and more countries have to grapple with tough decisions about how to fight vaccine doubts.
Although forced to take a stance: "Not vaccinated, can't work".