Obama Encourages COP26 to Discuss the Fate of Archipelago Countries

Obama Encourages COP26 to Discuss the Fate of Archipelago Countries

Former US president Barack Obama pushed for the UN climate change conference or COP26 to address the risk of island nations from rising sea levels. Obama said the story was very important because discussions about those risks at the 2015 climate talks led to the Paris Agreement.
Ummatimes - Under the Paris Climate Agreement, countries committed to keeping the earth's temperature below 2 degrees Celsius below pre-industrial levels. "I have been shaped by my experience growing up in Hawaii, we must act now with adaptation and resilience," Obama said in Glasgow, Scotland, Monday (8/11).
Island nation leaders pressured Obama at COP26 over the failure of the United States and other Western nations to fulfill promises to provide $100 billion a year to finance efforts to tackle climate change. "Amongst others, the United States has paid the least for its share of climate finance. Now we are the most vulnerable being asked to hold on and wait. The developed countries have failed us," said Fijian Prime Minister Frank BaBainimarama. 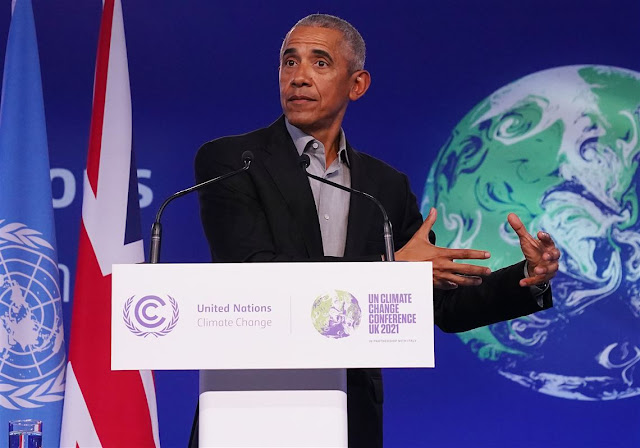 Obama arrived at COP26 in the second week of the climate change negotiations, which focused on the details that more than 190 countries need to agree on to implement the Paris Agreement further. During the meeting, Obama aimed to show how far the world has come since the Paris Agreement, an agreement reached and signed six years ago. But he also stressed the difficult work still awaits.
He said there was a big gap between the International Energy Agency's optimistic projections last week and corporate pledges to limit global warming to 1.8 degrees Celsius. UN predictions say current plans lead to a 'catastrophic' temperature rise of 2.7 degrees Celsius by the end of the century.
"That would make a huge difference to the island nation, every degree we can mitigate counts," Obama said.
Obama is also scheduled to meet with youth climate change activists. He said the activists would continue to pressure the government to take action to tackle climate change.