One school in California, United States warned parents about the secret distribution of "Paint" in the school environment. Paint is a drug with a psychedelic effect that is known to be highly addictive.
Ummatimes - The warning was conveyed by the Mesa Verde High School in Citrus Heights through a letter to parents. Through the letter, the school asked parents to open a conversation with their children about Paint.
One concern is the psychedelic effect of the Paint pill. Psychedelic effects can induce feelings of euphoria, hearing or seeing something that isn't really there. difficulty concentrating, sweating, sluggishness, numbness, vomiting, blurred vision, and a fast or irregular heart rate, according to the Alcohol and Drug Foundation. 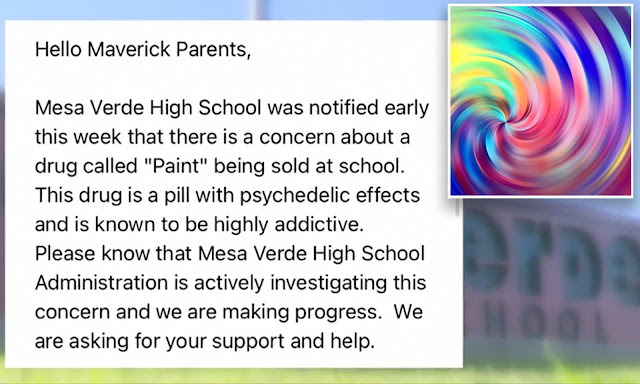 This drug is estimated to be sold at a price that is quite affordable for school children in the United States, which is five US dollars or around Rp. 71 thousand per pill. In the letter, it is stated that this drug has a clear appearance with a reddish-brown hue.
The school said the drug had caused several violent incidents in the school. The school is still investigating the distribution of Paint in this school environment.
"Please note that the Mesa Verde High School administration is actively investigating this concern and we are making progress. We ask for your support and assistance," the school said in a letter.