Saudi Crown Prince Mohammed bin Salman said the kingdom plans to build a floating industrial city near the free trade city, NEOM. The development is said to be part of the Vision 2030 initiative he is planning.
Ummatimes - Reporting from The New Arab, Thursday (18/11), if built, the city called OXAGON will become the largest floating industrial complex in the world. The city will be located on the Red Sea, near the Suez Canal, and aims to be a clean zero city powered by clean energy. 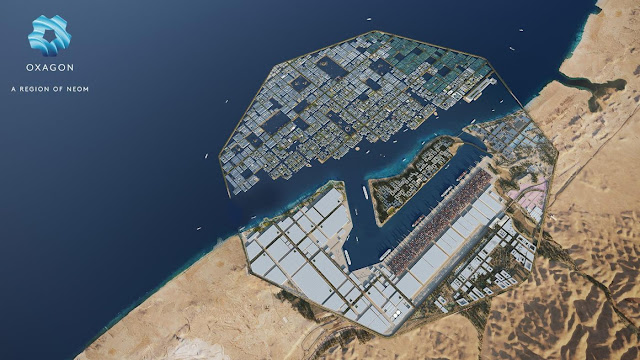 "OXAGON will be a catalyst for economic growth and diversity in NEOM and the Kingdom, further fulfilling our ambitions under Vision 2030," Prince Mohammed said.
"This will contribute to redefining the world's approach to future industrial development, protecting the environment while creating jobs and growth for NEOM. It will contribute to Saudi Arabia's regional trade and commerce, and support the creation of new focal points for global trade flows. I nice to see that," he added.
The city will be located near the futuristic mega-city NEOM and is planned to be 33 times the size of New York City. This announcement follows several similar ambitious plans by MBS and his team.
Saudi officials have previously stated foreign visitors to NEOM will be able to drink alcohol and mingle freely with people of the other gender. The project has previously faced criticism for the forced displacement of thousands of people in northwestern Saudi Arabia.