Singapore and Malaysia 'law' people who refuse to be vaccinated

Singapore and Malaysia 'law' people who refuse to be vaccinated

Around 29 thousand civil servants in Malaysia can receive disciplinary action because they have not been vaccinated against Covid-19. The statement was made by the Minister of the Interior of the Department of the Prime Minister of Malaysia who is responsible for the special functions of Abdul Latiff Ahmad.
Ummatimes - This was revealed by Abdul when answering parliamentary questions on Wednesday (10/11). According to him, based on data from the Disease Communication Center under the Ministry of Public Service (PSD), about 1.8 percent or 28,800 of the 1.6 million civil servants refused or had not been vaccinated against Covid-19.
According to Malaysian media report, the Star, the minister said civil servants who had not been vaccinated had the potential to face punishment. The punishments included receiving a warning letter, freezing his promotion, and deducting his salary. 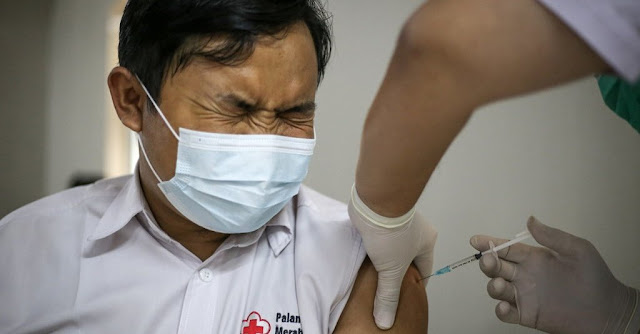 "There are procedures that need to be followed before disciplinary action can be taken. This includes issuing a warning letter from the head of the relevant civil service department, in which employees can provide answers for 21 days," he said as quoted by Channel News Asia, Friday (12/11). .
If the reasons for refusing to be vaccinated are unsatisfactory, the civil servant concerned is referred to the department's disciplinary committee for a domestic investigation before finally receiving disciplinary action. In its report, the Star also wrote that civil servants who were not vaccinated for health reasons must provide a medical statement from a government medical official to be presented to the head of the department.
Last month Bernama reported that under a new immunization policy that took effect on November 1, federal government employees will face disciplinary action or layoff if they fail to receive the full Covid-19 vaccine. On September 30, the PSD issued a statement before November 1 that all federal government employees must be fully vaccinated against COVID-19.
Bernama reported last Monday (8/11) that PSD said staff from the Ministry of Education are believed to have the largest group of unvaccinated civil servants. PSD Director General Mohd Khairul Adib Abd Rahman said his department updated the data on civil servants who had not been vaccinated. The process will be completed within two weeks.
On Wednesday (10/11) the Malay Mail quoted Abdul Latiff as saying no disciplinary action had been taken within 10 days after the mandatory vaccine was imposed. The Star quoted the Head of the Nine Home Affairs Minister Aminuddin Harun as saying that 36 state civil servants who refused to be vaccinated against Covid-19 would be given counseling.