SpaceX and NASA Successfully Launch 4 Astronauts to the Space Station

SpaceX and NASA Successfully Launch 4 Astronauts to the Space Station

SpaceX launches its fourth astronaut mission for NASA.
Ummatimes - The mission is part of the agency's commercial crew program.Four astronauts successfully launched into the International Space Station (ISS).
Quoting Space, a Falcon 9 rocket with a Crew Dragon capsule flies over the Kennedy NASA Space Center in Cape Canaveral, Florida, United States on Wednesday (11/10/2021) at 21:03 local time.
Rocket takes off from Pad 39A.
The launch marks the start of SpaceX's Crew-3 mission, which will take four astronauts, NASA's King Chari, Tom Marshburn and Kayla Barron, along with Matthias Maurer of the European Space Agency, on a 22-hour flight to the International Space Station (ISS).
"Thanks for a great trip; it was even better than we imagined," Chari, Crew-3 mission commander, told NASA mission control after the crew arrived safely in orbit.
After a series of weather-related delays, the Crew-3 launch countdown went smoothly, with the sales crew addressing critical leaks and checking communications ahead of schedule.
The crew seemed relaxed and ready for action as the minutes ticked by.
"What a beautiful launch," NASA associate administrator Bob Cabana said during the live broadcast.
"It was another great experience seeing all four take off into space tonight." 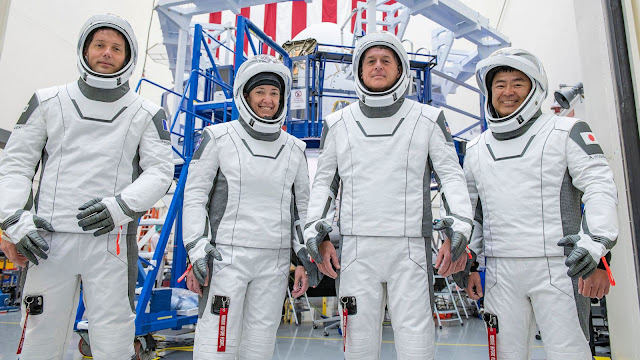 Once the Falcon 9's first stage engine fires up, the rocket puts on a stunning show, as the light from the engine illuminates the night sky.
"We are honored to fly Endurance on Veterans Day and we are proud to represent the SpaceX and NASA teams as we live and work on the ISS over the next six months," Chari told SpaceX flight controllers before liftoff.
The launch of Crew-3 marks the 25th launch this year in Florida and the 24th this year for SpaceX.
While the rocket is one of SpaceX's veteran aviators, launching on its second mission, the Dragon Crew capsule is completely new.
Dubbed Dragon Endurance by its crew, the capsule carries Crew-3 on a six-month mission aboard the ISS.
Marshburn, who was the only veteran spaceflight on the Crew-3 mission, told Space.com before launch that he was looking forward to experiencing spaceflight with his crew of three who had never been to space.
Meanwhile, Barron had never seen a rocket launch before.
His own flight was his first launch and his first time flying in space.
The only concern for the Crew-3 launch on Wednesday is the weather.
Teams from NASA and SpaceX met Tuesday night (9/11/2021) to discuss the mission before giving the official green light for launch.
At the Crew-2 splashdown, one of Dragon's four main parachutes was a bit slow to deploy, raising concerns for Crew-3's impending flight.
Both SpaceX and NASA said the launch worked as expected, with the rate of drop occurring as expected.
"We have one parachute [on Crew-2 Dragon] that inflates a little slower than the others," said Steve Stich, NASA's Commercial Crew Program manager.
"But the landing rate is nominal. We've poured in the data and convinced ourselves we're in good shape for launch."
Four Crew-3 astronauts traveled to the runway roughly three hours before launch this morning, riding a white Tesla Model X emblazoned with NASA's old "worm" logo.
Once there, they take the elevator to the crew access arm, which stands approximately 265 feet (81 meters) above the launch pad, and then climb into the capsule.
After a series of system checks, they then arm the Crew Dragon's cancellation system, a critical component to keeping them safe in the event of a launch emergency.
SpaceX then began refueling the rocket with very cold liquid oxygen and kerosene 45 minutes before liftoff.
Endurance is expected to dock with the space station on Thursday (11/11/2021) at 19:10 EST (0010 November 12 GMT).
The capsule and its crew will remain in orbit for six months.