Stephen Bannon, a former adviser to US President Donald Trump, has been charged with refusing a subpoena. This trial is at the request of the United States Congressional committee tasked with investigating the riots at the Capitol building on January 6, 2021.
Ummatimes - The news of the indictment against Bannon was delivered by the United States Department of Justice on Friday, November 12, 2021. Bannon is one of Trump's most influential former advisers.
Bannon refused to cooperate with the elected committee, which tried to solicit testimony and documents from him. Bannon insisted he had the right to keep the documents he asked for confidential under a law known as executive privilege. 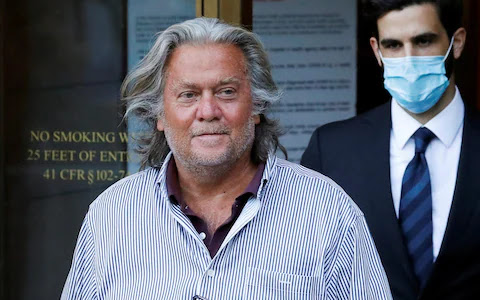 Bannon, 67, has been charged with one count of contempt for attempting to refuse to appear in court and present the requested documents. He faces up to one year in prison and a $100,000 fine.
U.S. Justice Department spokesman Bill Miller said Bannon was expected to turn himself in on Monday, November 15, 2021 and appear in court in the afternoon to hear his case.
Bannon was an adviser to former President Trump in the 2016 election campaign, who was later given the post of head of the White House. Bannon was credited with helping articulate the phrase 'America First'. He has also been a staunch opponent of immigration, which helped define Trump's presidency.