Although small, the scorpion is one of the deadliest animals in the world.
Ummatimes - The sting and venom of this octopod animal can make humans or the victims affected by the sting die in a relatively short time.
A scorpion with a venomous sting has killed three people and injured 450 in Aswan, Egypt.
The appearance of this eight-legged animal is believed to have occurred after a major storm on Friday (12/11) brought this animal to the streets and into homes. 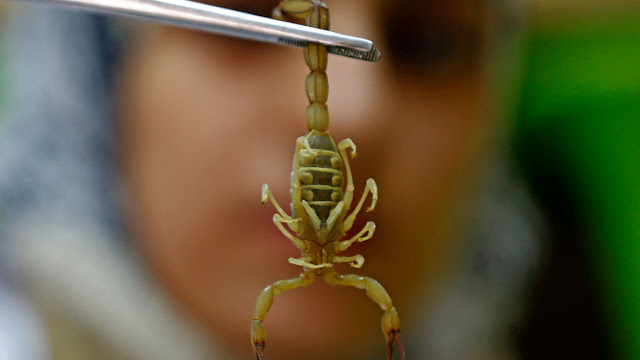 Reporting from The New Arab, Monday (15/11), thunder, rain, dust storms, and snowfall in Aswan drove the scorpions from their hiding places.
As a result of the incident, many people were hospitalized after being stung by the creature, an Egyptian Health Ministry official told local newspaper Al-Ahram.
"Hospitals across the province have increased their maximum readiness," Al-Ahram reported.
Doctors were eventually called in from the vaccination activity so they could help treat the victims' wounds.
Antivenom is available in hospitals and medical units across Aswan, and additional quantities have been delivered to medical units in villages in mountainous and desert areas.
Egypt is home to one of the world's deadliest scorpions, the fat tailed scorpion that can kill a human in less than an hour.
This species has large pincers and a long tail with a stinging spine.
Symptoms of the sting include difficulty breathing, muscle twitching, and unusual head movements.
Severe storms in Egypt also caused power outages and damaged infrastructure and trees in the southern city.
Egyptians were ordered to stay at home and avoid areas with trees.
Major transport routes were temporarily closed until Saturday morning, such as boats on the Nile from Aswan to Edfu and highways.
Heavy rains are expected over the next few days in parts of South Sinai and Southern Egypt.