A couple is suing a fertility clinic in Los Angeles. The reason is that the embryo that was injected into the womb of Daphna Cardinale, his wife, belonged to someone else.
Ummatimes - Daphna Cardinales said she and her husband, Alexander, suspected that the girl she gave birth to in late 2019 was not their flesh and blood. The reason is that the child has darker skin than his parents.
But at that time, they tried to suppress the doubts because they had already fallen in love with the baby. They also trust the IVF process and their doctor.
Three months later the couple decided to do a DNA test. The results indicated that the baby was not their child.
"I was overcome by feelings of fear, betrayal, anger and heartbreak," Cardinale said at a news conference with her husband, announcing the lawsuit. “I was robbed of the ability to bear children myself. I never had the chance to grow and bond with her during pregnancy."
The couple accused the Los Angeles-based California Center for Reproductive Health (CCRH) and its owner, Dr Eliran Mor, of medical malpractice, breach of contract, negligence and fraud. They demanded an undisclosed amount of compensation. 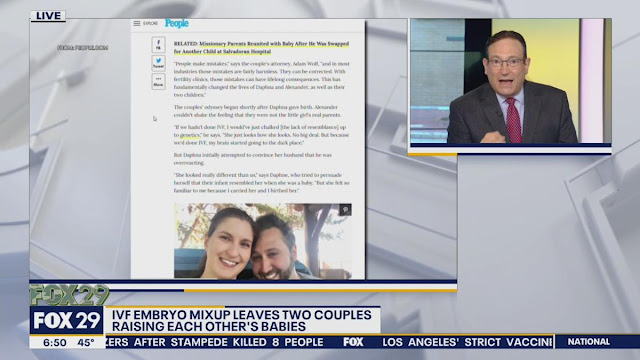 Yvonne Telles, the headquarters administrator, declined to comment on the case on Monday. Dr Mor also could not be reached for comment.
The embryo, which belonged to Daphna Cardinales and her husband, was conceived by another unnamed couple. They finally met and agreed to exchange the 2-year-old child.
According to lawyer Adam Wolf, another couple who took IVF and are the child's biological parents are planning a similar lawsuit against the fertility clinic. But they refused to give his name.