The Refugee Crisis in Belarus-Poland, What Causes It?

The Refugee Crisis in Belarus-Poland, What Causes It?

Thousands of immigrants hoping to enter western European countries are stuck at the border between Belarus and Poland. They set up tents at the border while Polish security forces watched them from behind barbed wire and prevented them from entering.
Ummatimes  - Quoted from Global News, Friday (12/11) the cause of this crisis began in August 2020 when Belarus was rocked by mass demonstrations against the election results that President Alexander Lukashenko won for the sixth time. The opposition and Western countries rejected the result because they believed the dictator rigged the election.
Belarusian authorities responded to the demonstrations with a violent crackdown. More than 35,000 people were arrested and thousands more were beaten by the police.
The European Union and the United States (US) responded to the brutality by imposing sanctions on the Lukashenko government. Sanctions were further strengthened after Belarus diverted a plane from Greece to Lithuania last May to land in Minsk to arrest journalist Raman Pratasevich. 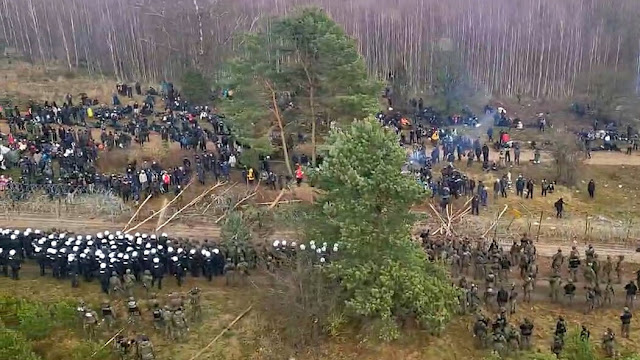 The European Union said the move constituted air piracy. The European Union later banned Belarusian airlines from flying in Europe and cut the country's main imports such as petroleum products and potassium carbonate, a fertilizer ingredient.
An outraged Lukashenko said he was no longer complying with the deal to curb illegal immigration. According to him, EU sanctions eliminate the income used to contain the influx of immigrants.
Migrant planes from Iraq, Syria and other countries arrived in Belarus. They were immediately directed to the borders of Poland, Lithuania and Latvia. One of the opposition's government Pavel Latushka said state-controlled tourism agencies were involved in offering visas to help immigrants and bring them to the border.
The European Union has accused Lukashenko of using immigrants as pawns in a "hybrid attack" against the 27-member body. Lukashenko denies encouraging a wave of immigrants and says the European Union violates immigrants' rights by denying them safe entry.
During the summer, Lithuania implemented a state of emergency to deal with small groups of immigrants and strengthen their border with Belarus. The country is setting up tents to accommodate the growing number of immigrants.
This week large groups of immigrants gathered at the Polish border and authorities in Warsaw sent riot police and other troops to strengthen border security. Polish authorities estimate around 3,000 to 4,000 people there.