The Sad Story of India's Lowest Caste: Harassed on Campus despite Achievements

The Sad Story of India's Lowest Caste: Harassed on Campus despite Achievements

Deepa P. Mohanan had to go on hunger strike for up to 11 days to get his rights as a doctoral student at a university in India. He became a victim of bullying, which almost made him fail to finish college, just because he came from a low caste.
Ummatimes - He was bullied by academic staff, barred from entering university laboratories and even denied a seat. Deepa P. Mohanan was desperate to complete her PhD as a Dalit caste woman, the lowest caste in India. But then he decided to fight back.
Mohanan, who researches nanomedicine, became the inspiration of tens of thousands of fellow students when he went on a hunger strike to protest discrimination and succeeded in forcing university authorities to deliver on promises of reform.
"I was eager to complete my PhD and realized that it would not be possible until I publicly called for the elimination of the campus discrimination I faced for years," Mohanan, 36, said in a telephone interview from his home in Kottayam in southern India. Reuters, Tuesday, November 30, 2021. 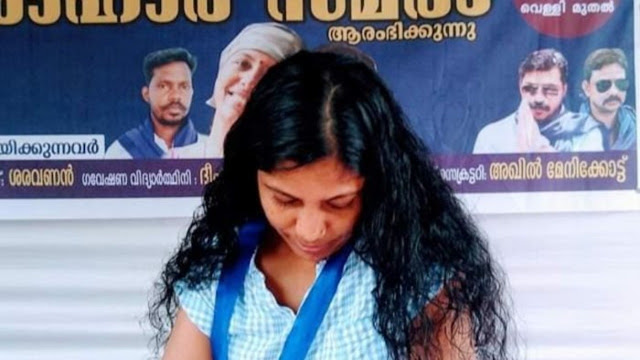 Mohanan ended his 11-day hunger strike earlier this month after the head of the International and Inter-University Center for Nanoscience and Nanotechnology Mahatma Gandhi was dismissed following his complaint.
The university has also set up a committee under the vice chancellor to investigate his allegations, which rights activists say reflect discrimination against low-caste students on campuses across the nation of 1.3 billion people.
Some 200 million people from the Dalits or Parya caste, who are at the bottom of the ancient caste hierarchy, are still struggling to access education and jobs six decades after India outlawed caste-based discrimination and introduced minimum quotas to increase their representation.
"Caste discrimination is very prevalent on campus ... the classroom has become a terrible space," said Jenny Rowena, a professor of English at Delhi University.
Rowena, who documents the experiences of the Dalit caste and other marginalized communities, says many Dalit students skip class to avoid being humiliated or drop out of school altogether, further worsening their representation.
Government higher education data shows enrollment of students from marginalized or low-caste communities in 2019-20 was 14.7 percent of all students aged 18-23, falling short of the mandated 15 percent quota in many fields of study.

Next: Calamity for low-caste citizens

Mohanan, who studies the formation of wound healing tissue using nanoparticles, was the only Dalit student in batch 100 when he joined his graduate program.
This single parent was the first in his family to go to university and pursue postgraduate research.
"Really, I didn't expect so much discrimination," said Mohanan, who before the hunger strike had filed numerous complaints with the university including lawsuits.
"Finally in the conversation it was revealed that if a Dalit student is liked it will affect the discipline of the institution. I initially felt defeated but then determined to fight back," he said.
For many Dalit students, campus life is a daily struggle, said Anuraji PR, national vice president of the Bhim Army student body, which supports Mohanan's protests.
Many fail internal assessments and supervisors often refuse to guide them to postdoctoral studies or question their abilities, said one graduate student, who asked not to be identified because he was about to take an exam.
Admission quotas for students from underrepresented groups, including low-caste Indians, have fueled discrimination, said C. Lakshmanan, a political science professor and national organizer of the Dalit Intellectual Collective.
"Students arriving via reservation are viewed as unfit by their peers and urban upper-class teachers, most of whom come from the same elite space. It is unfortunate that hunger strikes are necessary to fulfill academic goals."
The University Grants Commission, which oversees higher education in India, wrote to institutions in September urging them to strictly prevent caste discrimination on campus.
He asked the university to make sure the complaint register and website were available to students and said a committee should be formed to look into it.
The chairman and secretary of the Commission did not respond when asked for comment.

Abeda Salim Tadvi, whose 26-year-old daughter Payal died by suicide in her college dorm room in May 2019, blamed caste discrimination and bullying for the death.
A doctor studying specialist at a Mumbai hospital, Payal is undergoing a master's program in obstetrics and gynecology, but faces harassment every day - from name-calling and being asked to sleep on the floor by roommates to being barred from attending important surgeries.
"The sadness is still in my heart ... I can't let it go," said Tadvi, recalling many conversations with her daughter about how she was harassed by a more senior student in a specialist doctor's program.
"We tried to ignore him, complaining about it but in the end he couldn't deal with it. There was no mechanism on campus to convince or support him."
Tadvi, along with Radhika Vemula - whose son Rohith, a PhD at the University of Hyderabad, committed suicide in 2016 and alluded to caste discrimination in his suicide note - have petitioned India's top court demanding action.
In their petition in the ongoing case, the two women say all universities and higher education institutions should set up equality units to ensure complaints about caste discrimination are dealt with.
Currently, there are rarely consequences for college officials if cases of caste racial discrimination are reported on their campuses, said lawyer Disha Wadekar. "The most common response to complaints is psychic manipulation, where students are told the complaints are 'all in your head'," he said.