Rappers Travis Scott and Drake were sued by Astroworld Music Festival goer Kristian Paredes (23), Channel News Asia reported.
Ummatimes - It is known, the lawsuit is related to chaos at a music concert on Friday (11/5/2021) night that killed 8 people and injured hundreds of people.
Paredes, who was among the seriously injured, is suing Scott over the rapper's alleged involvement in the chaos.
Paredes also sued the organizers of the Live Nation concert and the owner of the NRG Park Houston concert venue.
In her lawsuit, Paredes said she felt someone pushed her directly in front of the general admissions department when Scott came on stage.
When the crowd became chaotic, Paredes continued, many people turned to the security guards for help, but were ignored. 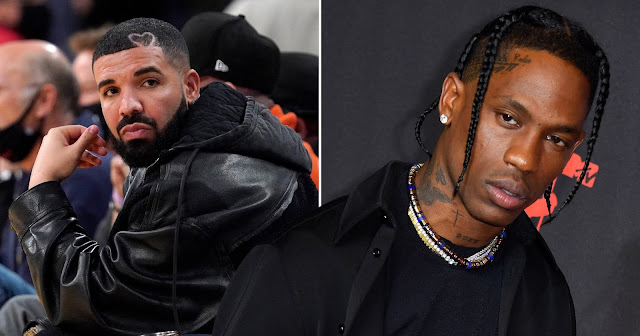 "The crowd became chaotic and a commotion started. Many appealed to the security guards hired by Live Nation Entertainment for help, but were ignored," explains Paredes.
The lawsuit, which was filed in Harris County Court of Houston, Texas, claims Scott had incited the chaos.
The lawsuit also accuses Canadian rap superstar Drake, who joined Scott's headline set, of contributing to causing the crowd to rush toward the stage.
"When Drake came on stage with Travis Scott, he helped stir up the audience even though he knew about Travis Scott's behavior beforehand," Paredes said.
"He continued to perform even when the crowd got out of control and the crowd continued", he added.
Furthermore, renowned attorney Ben Crump announced on Sunday that he has also filed a lawsuit against Scott and Astroworld.
He and co-counselor Bob Hilliard filed the lawsuit on behalf of 21-year-old concertgoer Noah Gutierrez, who described the concert as a scene of chaos and despair.
Lawyers say they hope to file lawsuits on behalf of other concertgoers during the week.
"We are hearing horrific reports of the terror and helplessness people experience, the devastating horrors of crowds and the horrific trauma of watching people die while trying to save them to no avail," Crump and Hilliard said in their statement.
"We urge others who have suffered physical or emotional injury or witnessed the events of the day to contact us," he added.

City of Houston, Texas Police Chief Troy Finner said his department had opened an investigation into the chaos at the Astroworld Music Festival on Friday night (5/11/2021).
The concert, featuring rapper Travis Scott, became chaotic after the crowd rushed to the stage.
The chaos left 8 people dead and hundreds injured, Channel News Asia reported.
An investigation was launched by homicide and narcotics detectives following reports that someone in the audience had injected drugs into another onlooker, Finner said.
A security guard said he felt an injection in his neck while trying to hold or grab someone's hand.
After feeling the injection, he fell unconscious, then regained consciousness when injected with a dose of the opioid antidote naloxone.
Finner said medical staff also noticed what appeared to be needle marks on the officer's neck.
It was not clear whether the injections had anything to do with the crowds rushing towards the stage.
However, the police will soon resolve the case, said Finner.
The police are currently waiting for the results of the autopsy to determine the cause of death of the eight victims.
Finner added that some of the victims appeared to have died from being trampled by other spectators.
Furthermore, City Fire Chief Samuel Pena said three hundred people were being treated at the on-site medical clinic for various injuries and illnesses, including multiple drug overdoses.
Twenty-five people were taken to hospital by ambulance after the chaos began.
Some of them had heart attacks, with 13 people still hospitalized as of Saturday, and four people having been discharged from hospital.
Five of the 13 victims were under 18, Mayor Sylvester Turner said.
The eight people who died were mostly between the ages of 14 and 27, although the age of one of the victims was not immediately known, Turner said.

The chaos at the festival broke out at NRG Park at around 9:30 p.m. on Friday during a headline show by Scott, a Grammy-nominated singer and producer.
As the fans in the roughly 50,000 crowd rushed towards the stage, people began to faint.
Some appeared to have suffered heart attacks or other medical problems, officials told reporters outside the venue.
"It happened all at once. It seemed like it just happened, in just a few minutes," said assistant chief executive of Houston police Larry Satterwhite, who was at the front of the event when the situation began.
Satterwhite said he immediately met with the promoter and they agreed to stop the show.
Officials said the concert ended at 10:10 p.m.
Meanwhile, videos uploaded to social media show chaos as fans and staff try to attract the attention of injured concertgoers.
One video shows fans trying to make camera operators aware of the dangerous situation.
A separate video shows people waving towards the stage and chanting "Stop the show!"
Scott stopped several times during his 75-minute performance when he saw fans in trouble and asked security to ensure their safety.
Emergency vehicles, flashing lights and alarms, cut off the sea of ​​onlookers several times.
"We need someone to help. Someone's passed out here," Scott said, according to the video of his set, which included a guest appearance by Canadian rapper Drake.
"Security, someone, jump in here really fast," he continued.
Another video clip shows police performing cardiopulmonary resuscitation on several people even as music blaring in the background.
The tragedy is reminiscent of a 1979 concert by British rock band The Who, in which 11 people were killed when fans stormed the Riverfront Coliseum in Cincinnati before the event.
To note, Scott, who rose to fame in the early 2010s for his unique vocal style, has a daughter with Kylie Jenner of the Kardashian family.
Astroworld is also the name of his third studio album released in 2018 which was critically acclaimed.
Houston-born Scott said he was absolutely devastated and vowed to support police as they investigate.
"My prayers are with the family and all those affected," Scott wrote on Twitter.

After entering the gates and merchandise booths in the morning, the crowd spiraled out of control as performers took to the stage, according to 19-year-old festivalgoer Hamad Al Barrak.
"There were too many people," said Al Barrak, who described the chaos as he tried to buy festival supplies.
"We were all pushed together and felt like we couldn't breathe," he continued.
Albert Merza, 43, who was part of a group of eight from Detroit who attended the festival, said he saw "a lot of drinking and crazy behavior".
"It felt like a riot," he said, adding that it appeared that about half of the crowd was under the age of 21.
"There were people throwing things away, things flying everywhere," he continued.
Meanwhile, according to Nick Johnson (17), the crowd lasted for more than two hours.
"It lasted for more than two hours, and it just got worse," he said.
Furthermore, according to Finner, an incident the day before, where fans started storming the festival gates, was brought under control relatively quickly.
Finner said police had 528 officers assigned to the festival as of Friday, along with 755 private security personnel.
During the day, 25 arrests were made. One each for marijuana possession and public poisoning and the rest for trespassing.
The venue for the event can accommodate up to 200,000, but organizers limit the crowd to 50,000, based on ticket sales.