The secretary general of the Tunisian General Trade Union (UGTT) said the country's suspended parliament should not be reinstated after President Kais Saied seized political power in July.
Ummatimes - They also urged that new legislative elections be held immediately, as quoted from Al Jazeera, Monday (15/11/2021).
In her statement to Al Jazeera on Sunday, Noureddine Taboubi reiterated the statement made by the UGTT spokesperson urging the Tunisian people not to restore parliament.
He previously said the Tunisian people had suffered as a result of the now frozen parliamentary measure. 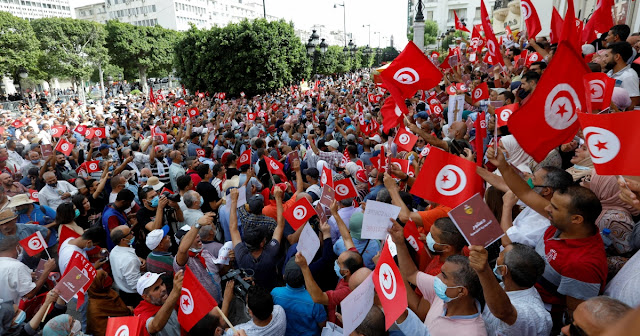 1. Wanting an election as soon as possible

According to Taboubi, in his phone call with Saied after Sunday's anti-government protests, the president was open and ready to listen to find solutions to the ongoing crisis.
He also said it was important for the government to review the country's electoral laws to hold legislative elections as soon as possible.
"We have the ability to find solutions through meaningful and calm dialogue," Taboubi said.
The UGTT, which has about one million members and is the dominant force in Tunisian politics, last week called for a judicial investigation after a demonstrator died from inhaling tear gas fired by police at a protest the reopening of a garbage dump in Aguereb.

Thousands of Tunisians took to the streets of the city of Tunis on Sunday to demand the restoration of the suspended parliament. Protesters clashed with police and demanded to restore democratic rule.
"We will not accept a new dictator, we will not step down," said Foued Ben Salem, a protester who waved the Tunisian red and white flag, quoted by Reuters.
"We are under one man government since July 25, we will stay here until they clear the way and end the siege," said Jawher Ben Mbarek, a protest leader.

reported by Middle East Eye, Kais Saied who was elected at the end of 2019 made a surprising move in July 2021 amid the socioeconomic crisis exacerbated by the Covid-19 pandemic. He sacked the prime minister and froze parliament.
Tunisia's political parties saw this as an attempted coup. Then, on September 22, Saied partially suspended the constitution and set the rules by decree, retaining full control of the judiciary as well as the power to fire ministers and pass laws.
He appointed a new government in October, with Najla Bouden as the North African nation's first female prime minister. But he has significantly reduced his powers back and will technically lead his own administration.