Turkey targets to expand its forest volume to a third of the country's surface area by 2023, President Recep Tayyip Erdogan said Thursday in commemoration of National Green Day.
Ummatimes - President Erdogan attended a tree planting event in the capital Ankara and said that according to the UN Global Forest Resources report, Turkey ranks first in Europe and fourth in the world in afforestation activities.
“Great areas of forest fires, floods, and meteorological events such as droughts are nature's warnings. We are aware of this warning and accept the message it gives."
He also expressed doubt that the perpetrators of the disaster had the same awareness and determination. Meanwhile the government is doing its part to prevent the consequences of this natural change.
“We are also fighting against this deviation. Every tree we plant is a sign of our struggle. Every voice we raise on international platforms is also a symbol of our struggle," Erdogan said.
He said Turkey has set a zero-carbon emission target for 2053 by participating in the Paris Climate Agreement and the country will also always be at the forefront of increasing forest wealth. 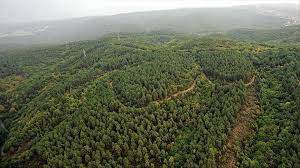 Referring to the report, Erdoan noted that with their afforestation and rehabilitation activities, Turkey has increased its position in the world's forest wealth ranking to 27th. By the end of 2023, about 7 billion tree seedlings will be planted and 30 percent of the country's territory will be covered with forests, he said.
Turkey was hit by forest fires during the summer in the country's southwestern province, Erdoan recalled, noting that they were quick to reforest the burned forest areas and said they were determined to complete the reforestation work within a year.
"The Mediterranean region, where the largest forest fires have occurred in recent years, is the region that will be most affected by climate change. When very high temperatures and very low humidity are combined with strong winds, it becomes difficult to control forest fires," he said. he.
“We have to pay a heavy price for all these negative conditions with a series of forest fires that started on July 28. This year, we are fighting 299 forest fires and 255 rural fires in 54 provinces of our country," Erdogan said.