Ukraine Gives Incentives For Citizens Who Want To Be Vaccinated

Ukraine Gives Incentives For Citizens Who Want To Be Vaccinated

The Ukrainian government on Monday (11/15/2021) has decided to provide incentives for its citizens who are willing to be vaccinated. This decision is expected to increase the number of COVID-19 vaccinations in the Eastern European country which is relatively low.
Ummatimes - Incentive policies have been implemented by several other European countries to increase interest in vaccinating citizens and achieve inoculation targets in the fight against COVID-19.

1. The government provides an incentive of 1,000 hryvnia

President of Ukraine Volodymyr Zelenskiy conveyed this incentive directly through his video conference. However, the money is only given to someone who is willing to be vaccinated against COVID-19 in full or twice.
Zelenskiy also said the incentives were up to 1,000 hryvnia. "All who are willing to be vaccinated twice against COVID-19 will receive 1,000 hryvnia," he said. 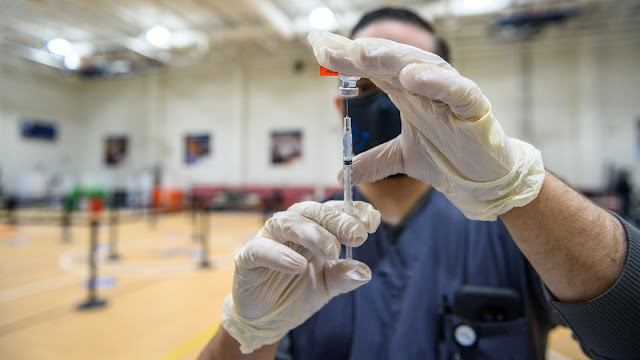 The amount of money is quite significant for the citizens of Ukraine, which is among the poorest countries in Europe. The reason is, in one year the income per capita of the Ukrainian population is only IDR 52 million.
"With that money, you can buy tickets for games or fitness clubs, visit cinemas, theaters, museums, concerts and exhibitions, or buy tickets to travel within the country," said Zelenskiy, on the RFE/RL page.

2. The government will disburse funds of up to 225 million US dollars

This incentive scheme will require funding of US$225 million. Meanwhile, this incentive will start next month, precisely on December 19 until 2022.
Meanwhile, this policy was implemented to attract people to be willing to be vaccinated. The reason is, based on data from the local Ministry of Health, only 28 percent of the Ukrainian population received two doses of the COVID-19 vaccine.
In fact, the Ukrainian government has previously implemented several policies to force citizens to be inoculated, such as imposing restrictions on citizens who have not been vaccinated and implementing vaccine certificate requirements in some public areas, reported ENCA.

3. Cases of COVID-19 transmission in Ukraine continue to increase

Ukraine is one of the countries in Europe that has experienced an increase in COVID-19 cases in the last two months. Even the record daily transmission reached more than 26,000 plus the number of deaths from COVID-19 which reached a record high of 833 people in a day, reported from Reuters.
The Ukrainian government said the increase in transmission cases and deaths from COVID-19 was due to low vaccination rates. As a result, local authorities have implemented social restrictions in several major cities, including the capital Kyiv.
Since the beginning of the pandemic until now, COVID-19 cases in the country of 45 million people have reached 3.2 million with a death toll of more than 77,000.
Previously, Ukraine had also experienced a shortage of COVID-19 vaccines earlier this year, amid vaccine scarcity in Western countries and refusing the offer of the Sputnik V vaccine from Russia. However, the Eastern European country eventually turned to China to bring in the Sinovac vaccine.
Quoted from Unkrinform, Minister of Health Viktor Liashko said that now the former Soviet Union has received 31 million doses of the COVID-19 vaccine.