Vietnamese Officials Are Criticized After Eating Steak Priced at $ 1,000 in London

Vietnamese Officials Are Criticized After Eating Steak Priced at US$ 1,000 Million in London

A video circulating on social networks has sparked outrage among Vietnamese people. The video shows a Vietnamese official eating at a fancy restaurant when many of its residents are mired in poverty.
Ummatimes - In the video, a celebrity chef Salt Bae is cooking steak and serving it to Vietnam's Minister of Public Security To Lam. The Turkish chef cooks at the famous Nusr-Et Steakhouse restaurant in London.
The video was posted on the Instagram account of restaurant owner and chef Nusr-Et, Salt Bae, which has 40 million followers. This video has been removed by the restaurant.
Specialty Salt Bae serves steak wrapped in edible 24 karat gold leaf. The price per portion is reportedly more than US$ 1,000. Salt Bae's customers are world celebrities such as David Beckham, Leonardo DiCaprio and Naomi Campbell.
Although the video has been removed by the restaurant, footage of Minister Lam eating steak at the Salt Bae restaurant has already spread on Tiktok and Facebook. This show drew criticism from Vietnamese citizens. 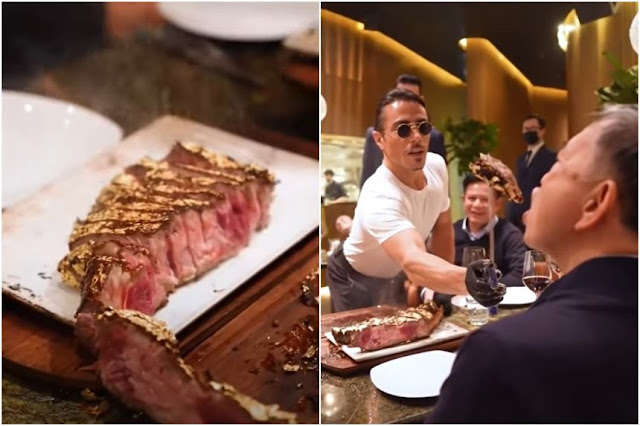 Many were angry at Lam's actions when Vietnam was struggling to contain the spread of Covid-19. The pandemic also caused unemployment to rise, causing the heaviest contraction of the Vietnamese economy.
"People are facing extreme hardship because of the pandemic, but (officials) are enjoying themselves in a world-class celebrity way," Pham Viet Duc wrote on Facebook.
"The government always complains of financial difficulties, but they steal people's money for a luxurious life, as if there is no tomorrow," he said.
Another resident posted pictures of poor children in the poorest areas of Vietnam. "Accidentally saw this video, they spent money this way or a thousand times more," Tommy Lee said on Facebook.
The average income of Vietnamese citizens is US $ 184 per month in 2020 or around Rp. 2.6 million.
It is not clear when the video circulated. But Lam is in the UK for the COP26 climate conference. He also met the UK Home Secretary on Monday.