What is the 'One China Policy' and Why is the US Defending Taiwan?

What is the 'One China Policy' and Why is the US Defending Taiwan?

One of the flashpoints of current world conflicts is in the Asia Pacific, to be precise in Taiwan. In this region, tensions between China and Taiwan are feared to trigger a wide-ranging conflict that will drag on a large-scale military confrontation.
Ummatimes - In China's view, Taiwan is a breakaway province. It is part of the One China Principle. But the island, which has about 23 million inhabitants and is self-governing democratically, rejects China's claims.
This is actually the root of the tension conflict in the Asia Pacific, which is feared to be a threat of a major war. This is because the United States supports and will defend Taiwan if China steps up to carry out military aggression. 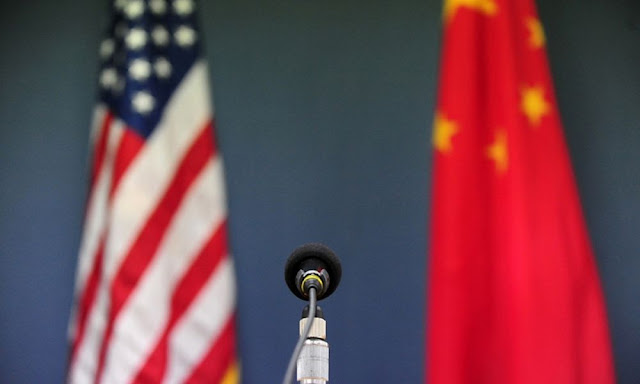 There are two terms that are similar but actually different. The two terms are the 'One China Policy' and the 'One China Principle.' The One China Policy is a policy recognized by the US in 1979 that there is only one country named China.
Meanwhile, the 'One China Principle' is that Taipei and Beijing both recognize one 'China' but do not agree on who is the legitimate government. This principle refers to the 1922 Consensus.
In Beijing's view, the 'One China Principle' is that Taipei is part of China, while the idea is met with stiff challenges from political groups in Taiwan who are constantly trying to establish self-government and separate from mainland China.
China is officially in the international arena called the People's Republic of China (PRoC) while Taiwan chose the name Republic of China (RoC) or also known as Chinese Taipei.
The two parties to the dispute are still using Mandarin as the official language. Many things related to the cultural side between the two are also the same.
But politically, the two of them continued to fight and conflict. This tension continues to this day and even poses the threat of a military confrontation.

There is a complicated history of current China-Taiwan tensions. From 1927 to 1949, the Kuomintang (KMT) which brought the RoC fought with the Chinese Communist Party (CCP). The war briefly stopped when Japan invaded mainland China.
During the Japanese colonial era, the KMT and the CCP united to fight against the colonial powers, with the help of Allied forces.
The two warring parties then re-engage in the fight after Japan lost. The battle was very bloody and deadly and the CCP was able to defeat the KMT.
Finally, the KMT led by Chiang Kai-Shek fled and took his troops to Taiwan. Taiwan itself, during the colonial era was once controlled by Japan. But when Japan lost, the island was automatically handed back to China.
According to the BBC, when the civil war ended in 1949, the Kuomintang began to form a self-government in Taiwan and the ruling CCP ruled mainland China under the name PRoC.
Both sides claim to represent all of China.
But the rise of the CCP ruling in mainland China threatens to use force if Taiwan officially declares independence. More subtle diplomatic efforts to bring Taiwan back into China's arms have also been unsuccessful.

3. US between Taiwan and China

Since the CCP has further established its rule in mainland China and declared itself the PROC in 1949, the United States has not recognized it. The US at that time was part of the Allied forces that helped defeat the Japanese in China.
The US still recognizes that the official government is led by Chiang Kai-Shek, who brought his troops back to Taiwan. Even Washington does not have diplomatic relations with Beijing. In contrast, Washington has an official office in Taipei, Taiwan.
But when the US saw China moving away from communism and out of mutual interest, in 1979, US President Jimmy Carter formally established formal relations with Beijing and closed the embassy in Taiwan.
Previously, in 1971, Chiang Kai-Shek's position in the United Nations representing his country, was also expelled after the General Assembly recognized China's sovereignty.
According to the Center for Strategic & International Studies, although the US maintains warm relations with China, its "legs" have not completely left Taiwan. The US Congress passed the Taiwan Relations Act that same year, to protect significant US commercial and security interests on the island.
Without formal diplomatic relations, the law provides a framework for continuing US relations with Taiwan, including regarding commercial, cultural, security and other interests between the US people and the Taiwanese people.
The US has the American Institute in Taiwan (AIT) in partnership with the Taipei Economic and Cultural Representative Office (TECRO). Through these two institutions, there is ongoing interaction even though there is no official diplomatic relationship.

Political turmoil persists, both in China and in Taiwan. In Taiwan, when Chiang Kai-Shek's dictatorship was succeeded by his son Chiang Ching-Kuo in 1987, martial law was lifted and the transition to significant economic growth began.
According to CNN, even Taiwan and China then established diplomatic relations and invested heavily in each other. Taiwan with its electronic products, made a big investment in China. Instead, millions of Chinese travel to Taiwan, enjoying the beauty of nature.
The warmth of China-Taiwan relations occurred in the 1990s. In this process, even China also hopes that there will be a process of reunification of Taiwan into China's lap.
However, Taiwan which later turned into a democratic government, the opposition rejected the reunification and still chose to govern independently. The main goal remains to achieve sovereignty to become an independent country.
The two main political forces in Taiwan are the KMT and the DPP (Democratic Progressive Party). Taiwan is now led by President Tsai Ing-Wen of the DPP. Tsai is a resolute woman who supports the idea of ​​Taiwan becoming an independent and sovereign nation.
On the other hand, Xi Jinping who leads China, is one of the strong leaders and has succeeded in bringing China to achieve much success in various fields, including economic growth and military strength.
And Xi Jinping, in October 2021, said "the historical task of reunification of the homeland must be fulfilled," he was quoted as saying by Deutsche Welle. He hopes that Taiwan can return to China's lap peacefully, without military action.

5. How important is Taiwan to China and the US?

Taiwan has historically had a long record of being part of the Chinese dynasty. Hong Kong's return to Chinese control from Britain in 1997 was seen as a success.
But with Taiwan's insistence, the Chinese are widely regarded as the last remnant of a century of disdain for the crumbs of colonialism. CSIS said that Xi Jinping's attempt to separate Taiwan was seen as an obstacle to China's rise as a great power.
There is a promise that the Chinese Communist Party must keep, namely the unification of Taiwan to their homeland.
The US has been embroiled in the Sino-Taiwan conflict from the very beginning. However, the US does not officially (or has not) recognized Taiwan's sovereignty as a country. It's just that there are often opinions from high-ranking officials who refer to Taiwan as a country. The term has often sparked Beijing's ire.
Taiwan itself is very important to the US. Taiwan was the US's 12th largest trading partner in 2012, and in 2017 it became the 9th largest trading partner. The US also sells billions of dollars in defense weapons to Taiwan.
It's not just a matter of trading partners, but it's more of a way to protect "old friends" and the democratic ideas that Taiwan has implemented. The US wants to defend the freedom of the Taiwanese people who value democracy more than the typical communist authoritarianism.

6. United or war? How simple is that?

If we currently look at the development of tensions in East Asia, which can also trigger instability in the Asia Pacific and the world in general, there is a kind of frame that shows two options.
The two options are, Beijing can force Taipei to re-unite, or else military action will be taken. China has now become a giant, not only in the economic field but also in the military field.
But of the two options, according to John Culver of The Interpreter, the two options are very dangerous simplification options.
According to him, for the last few decades since the 1970s, China has had a political strategy for unification of Taiwan, including a military component. China has built the foundation of international relations, including with the US, for the Taiwan issue.
For Culver, the CCP will probably be able to continue to be patient and carry out a series of strategic campaigns in its goal of bringing Taiwan into Beijing's lap. This can go on for months, years and even decades into the future.
The tension between China and Taiwan is a civil war that has not completely ended since the past.
If a military conflict really erupts, the East Asia region, which for decades has been one of the mecca of world economic growth and the main source of supply of various manufactured goods, will be cut off instantly and cause great chaos.
This is because it will feature the US-China, the two largest economic and military powers in the world.