Why does China still insist on implementing a zero Covid strategy?

Why does China still insist on implementing a zero Covid strategy?

At a time when the world is getting used to living in the midst of the Covid-19 pandemic, China, where the corona virus first started, is still implementing strict restrictions for its citizens.
Ummatimes - A person who walks into a five-star hotel to ask for directions, for example, ends up in a two-week quarantine because a guest has had contact with a person who has tested positive for the coronavirus.
A high-speed train crew turned out to be in close contact with an infected person, and all the train passengers were quarantined, to be tested en masse.
At Disneyland, Shanghai, 33,863 visitors suddenly had to undergo mass testing because the previous day there were visitors who were infected. 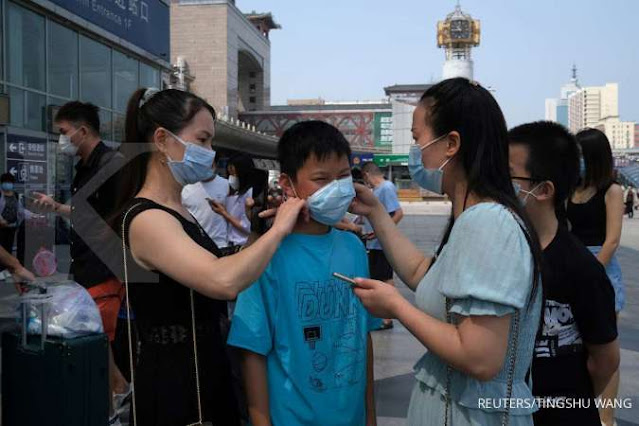 China is one of the countries that continues to implement a zero Covid strategy.
China was the first country to implement restrictions to combat the pandemic and will likely be one of the last to ease them.
When you talk to ordinary citizens on the streets of China, you'll find that many don't seem to mind such strict restrictions, as long as they stay safe.
I asked a woman if China should open sooner? He said it is better to wait until the pandemic is completely over because safety is number one.
One woman, who had just returned from her office, told me that the coronavirus is not fully understood. He said vaccinations would also increase, therefore, for the sake of social stability, it is better to delay the opening of borders.
Not long ago, other countries such as Australia, New Zealand, and Singapore also considered the corona virus outbreak as something that must be completely eradicated from society. Those countries are isolating cities until the virus stops spreading.
The goal, so that there is no more transmission at the local level.
However, this strategy was forced to change again when a Delta variant emerged which was much more difficult to control and vaccination rates were already high.
High vaccination rates mean people may still catch Covid-19, but not go to hospital. This has made several countries open their doors to international travel.
But in China, visas for foreigners remain hard to come by and Chinese passports are still not renewed after their expiration date.
Elsewhere, people are getting used to "living with the virus," but not in China, where outbreaks of the Delta variant hit with as much force as before vaccination.
If official data is accurate, more than 1,000 local transmissions have been recorded since October.
The figure is not very high, but the spread is quite significant, covering 21 provinces. This condition is considered important because in China only a few cases will trigger strict policies, just as when the number of new infections reaches hundreds or thousands.

One case only, strict restrictions were immediately applied

There seems to be no sign of the Chinese government changing its policy, although some Chinese scientists have urged the government to rethink.
Professor Guan Yi, a virologist from the University of Hong Kong and a government adviser, called for the mass nucleic acid test (which can detect infection) to be replaced by a mass antibody test (which could help scientists understand the vaccine's effectiveness).
In an interview with Phoenix TV, he said that in the long run, the zero-Covid strategy will not succeed in getting rid of the virus completely.
"The virus is now permanent," he said. "Similar to influenza, which will circulate in humans for a long time."
This concept will not surprise people in other countries.
But in China, the government has trained its citizens to adopt a return-to-zero strategy every time there is a new wave. It's hard to change this pattern.
When asked how much protection a Chinese vaccine might offer against the coronavirus mutation, Prof Guan said the question should be answered by vaccine manufacturers.
He is not the only academic now questioning the direction of Beijing's policies.
Dr Haung Yanzhong, of the New York-based Council on Foreign Relations, said the main problem was that the vaccine could not achieve what the Chinese government wanted. This made the Chinese government wary.
"They don't believe in the effectiveness of the vaccine, the ability of the vaccine to prevent infection," he told the BBC, "because the truth is that even the best vaccine can't prevent infection, but a zero-case strategy can't even accept one infection."
Dr Haung added that the Chinese government was in a political and ideological tie when it announced its success to the people.
"The zero-case strategy is also part of the official narrative, to claim the success of China's model of responding to the pandemic and the superiority of China's political system. So if that strategy is released and then cases increase significantly, it will make people question the model."

Going forward, Beijing has several major events and there is great desire among officials to hold them in an environment free from the Covid outbreak.
The closest is the Winter Olympics in February 2022. Tickets aren't on sale yet, but they want an audience in the stands.
In October next year there will also be the five-yearly congress of the Communist Party, when Xi Jinping is expected to begin his historic third term.
Another interpretation is that Secretary General Xi Jinping and his administration like the idea of ​​reducing foreign influence in China, and the pandemic has provided a very good reason to move in this direction.
On social media, several nationalist posts criticized the international influence on the "Chinese" way of doing things.
The government's focus has clearly shifted from a philosophy of "reform and opening up" to one that puts the Communist Party at the center of everything, with its leader Xi Jinping.
Given that other countries have opened their borders, the BBC asked Foreign Ministry spokesman Wang Wenbin when his country would do the same.
He replied that China had observed the experiences of other countries and would follow science to make decisions regarding the emergence of new variants.
However, experts close to the authorities are giving no signs that the zero Covid strategy is coming to an end anytime soon. In fact, quite the opposite.

Dr Zhong Nanshan is considered a medical hero in China. The respiratory medicine specialist rose to global prominence in 2003 for opposing the then government's claim that the Sars outbreak was not so severe.
These days many people, including officials, listen to what he has to say.
In a recent interview, he said China's strict Covid remediation measures would remain in place for "a rather long time".
He added that the global Covid-19 death rate of 2% was too high for China, even with an existing vaccine.
The risk of opening territory too soon is not worth it, he said. He added that China would observe other countries' experiences with "live-with-Covid" plans.
It's also important to consider that Chinese officials can be very conservative when it comes to strategy. It is possible that they are planning to "re-open" the country again and are in no hurry to do so.
For many of those who want to enter China or leave it, they have no choice but to wait and see.
Middle and upper class people may lament the limited freedom of movement internationally, but many ordinary citizens seem content to allow the government to manage the situation if it keeps them healthy.
Meanwhile, mass testing, centralized quarantine, transport control, high-level surveillance, shipping tracking and tracking as well as strict local area quarantine will remain a part of life in China.