Xi Jinping Threatens Joe Biden Not to 'Play with Fire'

Xi Jinping Threatens Joe Biden Not to 'Play with Fire'

President Xi Jinping warned the United States (US) that China would take decisive steps if Taiwan showed a desire to become an independent nation.
Ummatimes - Xi also warned US President Joe Biden that supporting Taiwan independence would be 'playing with fire'. Xi also warned that anyone who "plays with fire" must be prepared to "get burned".
The language reflects China's nationalist rhetoric, the meaning of which is strengthened by being delivered at a meeting at the head of state level. The Xi-Biden meeting will be held virtually from 8:45 a.m. to 12:24 p.m. Beijing time. 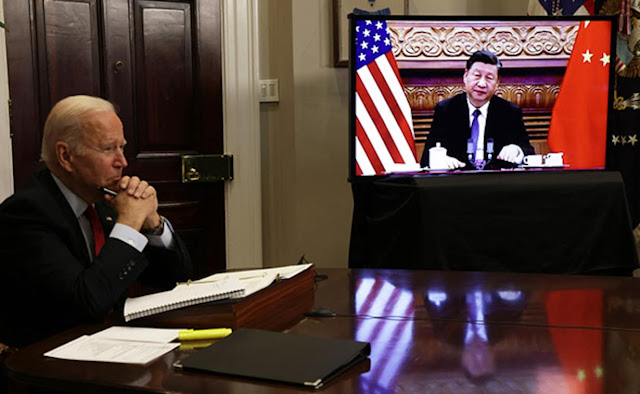 Xi's remarks refer to Biden's remarks some time ago, which reiterated the US commitment to protect Taiwan if China invaded at any time.
In response, Biden said the US was sticking to the One China Policy, which recognizes only one sovereign China. Biden also said Washington opposes any unilateral attempt to change the status quo for peace and stability in the Taiwan Strait.
The phrase reflects the ambiguous US attitude so far. On the one hand, Biden does not appear to want Taiwan to declare independence. On the other hand, Biden also hopes that China will not invade.
The 46th US president also reminded Xi that they both have an international responsibility to ensure global stability, as fellow members of the UN Security Council as well as two world economic powers.

2. The purpose of dialogue is to manage conflict

Chinese state media described the talks as honest, constructive, substantive and fruitful.
A US official who asked not to be named reported that the meeting was respectful, straightforward and open. However, he stressed that the goal of dialogue is to manage conflict, not expecting a major breakthrough.
"We didn't expect a breakthrough. Nothing was reported. This (dialogue) is about developing ways to manage competition responsibly, ensuring that as we move forward, the US and China have a stable state, where we act competitively but maintain communication," the official said.

3. Biden wants to build a corridor of US-China relations

One of Biden's hopes from the meeting is that the two countries can agree on boundaries in attitude and communication. Thus, no policy or attitude crosses the 'boundary'.
"We need to build a common sense fence, to be clear and honest when we disagree, and to work together when we cross paths, especially on global issues like climate change," Biden said.
"It appears to be our responsibility, as leaders of China and the United States, to ensure that competition between our countries does not lead to conflict, whether intentional or unintentional," he added.