A group of demonstrators on Thursday (16/12/2021) damaged and burned the government building of Chubut Province, Argentina. This was done because the members of parliament actually approved a law that supports the existence of a large open-pit mine in the province.
Reporting from the Buenos Aires Times, activists have always considered the law as a way of government approval for the activities of large mining companies. This has caused controversy and is said to be damaging the Chubut environment.

Demonstrations took place in the provincial capital of Chubut, Rawson on Thursday, in response to the local government's rejection of the decision. However, the demonstration which started out peacefully ended in chaos and vandalism and arson took place around the government building area. 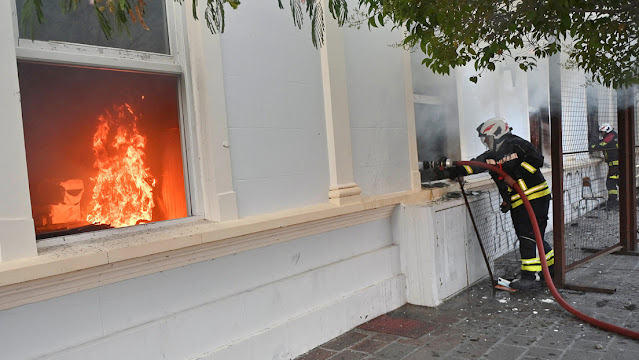 Reporting from Mercopress, severe damage occurred in a number of public roads by burning cars. This was done after demonstrators attacked and burned 16 government buildings in Chubut Province.
According to information from local television, several government-owned facilities, including the Chubut Prosecutor's Office, Rawson Plaza, the Government and Legislative Buildings, had been the target of attacks from the demonstrators and all of them had been burned to the ground.

2. Dozens of demonstrators were injured and rushed to the hospital

Demonstrations have not only occurred in Rawson, but have also occurred in almost all areas of Cubhut, especially in Esquel and Comodoro Rivadavia. The demonstrators were known to have pelted the police with stones and responded with rubber bullets from the police on duty.
Clashes between demonstrators and police officers have left 11 people with bruises and rushed to Santa Teresita Hospital because they were hit by rubber bullets from officers. However, one person was reportedly being treated for inhaling the toxic gas, the Market Research Telecast reports.
Regarding this issue, the human rights organization accused the police of violence to repel the demonstrators. Not only that, several demonstrators have also been arrested by the police because they are suspected of being the masterminds of the protests.

Quoted by the Buenos Aires Times, the Mining Activity Zoning Law which was approved on Wednesday (15/12/2021) by the Chubut parliament has so far been controversial and has been rejected by a number of sectors and levels of society.
In fact, experts from the Universidad Nacional de la Patagonia San Juan Bosco and CONICET (National Scientific and Technical Research Council) suspect this inauguration will pave the way for major silver, copper mining in Telsen and Gastre.
In fact, previously large open-pit mining activities and the use of cyanide were prohibited in Chubut. However, the parliament revealed that the use of cyanide is still prohibited and there are still a number of prohibited zones for mining, even though the mining area is expanded.
This law will allow a number of mining companies to invest in Chubut. These include the Navidad silver mine which is already being eyed by Canadian mining company Pan American Silver Corp.
However, this law still has to be approved by Governor Mariano Arcioni and a number of officials have yet to determine the specific rules regarding permitted mining exploration.