Australia is battling natural disasters that hit the west and east coasts of the country on Friday (10/12). The west coast was hit by bushfires, while severe flooding and heavy rains hit the east of the country.
Ummatimes - According to reports, after several weeks of high temperatures, the fire began to flank the western tourist hub of Margaret River. The region is known for its fine wines and big waves. No homes were damaged or injured were reported. But the fire was visible over a large area and began to send smoke billowing high into the sky.
An emergency alert then applies. Some residents have been advised to flee to safety or take shelter in safe houses. "Act immediately to survive," the state's Department of Fire and Emergency Services said. 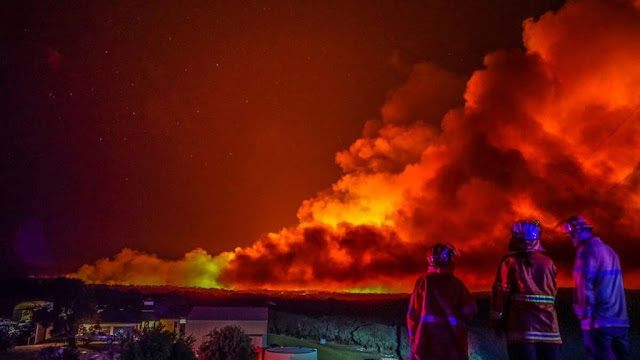 While Australia's Indian Ocean coast has been sizzling under temperatures that have hit 40 degrees Celsius, on the other side of the continent its Pacific Coast has been raining for months. "A center of low pressure has formed off the southern coast of New South Wales which brought heavy rains and heavy flooding," the Bureau of Meteorology said.
Several rural areas south of Sydney were also hit by the worst bushfires in the country exactly two years ago. Now the area has been drenched in rain and caused flooding as high as 21 cm in the last 24 hours alone.
November was the wettest in 122 years on record and among the coolest, when the La Nina weather phenomenon occurred. Scientists believe Australia's extreme weather has been exacerbated by man-made climate change. In recent years the continent has experienced a series of climate-exacerbating droughts, forest fires and floods.