Tens of thousands of people demonstrate against the mandatory Covid-19 vaccine policy in the Austrian capital, Vienna, Saturday (11/12). Protesters also protested against an order not to leave the house for anyone who has not received a Covid-19 injection.
Ummatimes - Police said about 44,000 people took part in the demonstrations in a series of major protests over the weekend. A number of groups called for protests on Saturday, including the far-right Freedom party, led by leader Herbert Kickl.
"Not to vaccinate fascism," read one of the posts on the protest board, as quoted by The Guardian page, Saturday (12/12). "I'm not a neo-Nazi or a hooligan," said another, "I'm fighting for freedom and against vaccines."
Last month Austria became the first European Union country to plan to make Covid-19 vaccinations mandatory for its citizens. A partial ban on not leaving the house since last month ended today. However those who have not received the required dose should remain indoors. 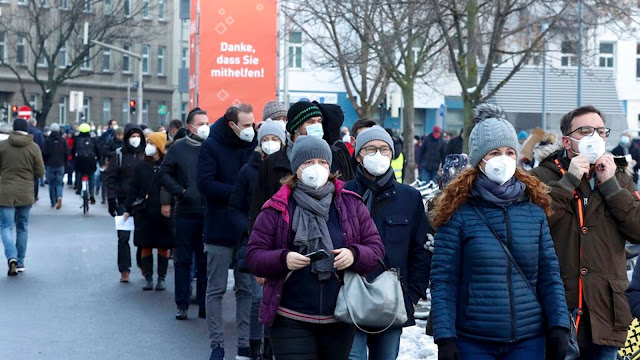 Vaccination becomes mandatory from February for everyone over the age of 14, except in cases of dispensation for health reasons. The government says no one will be vaccinated forcibly, but those who refuse the injection will have to pay an initial fine of 600 euros which can then increase to 3,600 euros if not resolved.
One resident, Manuela, 47, said she had traveled to the capital to take part in the protests. "Why exclude those who are not vaccinated, especially children?" asked Manuela.
He said he was vaccinated, but would not give his surname. "It's a tremendous discrimination not to be able to send children to dance, tennis or swimming lessons," he said.
A violin teacher, Analea (44 years old) said that this government policy is not the direction that democracy should take. "We may have different opinions and values, but still live together freely," he said.