The inauguration of Xi Jinping as the new president of China on March 14, 2013 brought fresh air to China's progress to this day. In his leadership, several new breakthroughs emerged to support China's economic progress, one of which was the Belt and Road Initiative (BRI).
At the beginning of last November, there was a lot of discussion about the issue of Uganda's airport being confiscated by the Chinese government after the country failed to pay off its debts. Although directly denied by the Chinese government, the issue of loans in the country has shown the existence of the Chinese program which is really said to want to rule the world.
Ummatimes - This program is predicted to be a new and very large policy that has never existed before in human history and has been growing rapidly and being implemented in various countries in the world.
So what exactly is the Belt and Road Initiative? The following is information about BRI China. 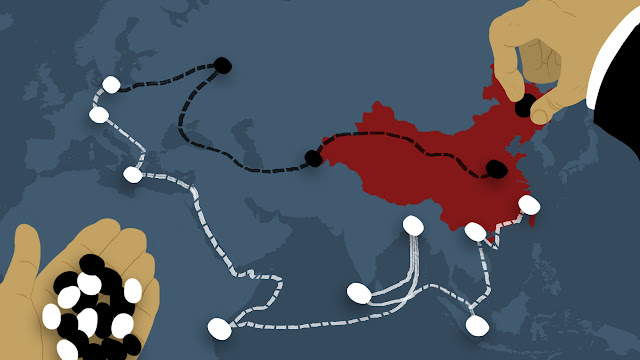 The Belt and Road Initiative is a foreign policy idea or policy created and endorsed by the Chinese president, Xi Jinping. This policy was passed by Xi in late 2013 after he was previously sworn in in March 2013.
This program is a global initiative in an effort to accelerate economic development through the construction of various infrastructure facilities.
This policy has completed various construction projects in almost a decade in various countries in the world that cooperate with China. This project was initiated by Xi because of the emergence of Xi Jinping's thoughts related to Chinese-style socialism for a new era.
It has been enshrined in the constitution of the Chinese Communist Party (CCP). Directly since its inception, the BRI project reflects China's influence on global powers politically and economically.

2. Aims to connect China's periphery provinces with other countries

BRI is very important for China's economic growth and also as a means of diplomacy for the country. By linking China's less developed provinces with other countries, it is hoped to increase the economic activity of several provinces.
Regionally, the BRI is designed to address the chronic problem of uneven development in China. The disparity between the inland west and the affluent east coast states is a major challenge for the ruling party.
Since 1999 the Chinese government has pursued a so-called “Western development strategy” to revitalize chronically underperforming provinces including the Muslim-majority autonomous region, Xinjiang. However, these efforts did not produce much tangible results.
With the existence of this BRI, China will open new market doors for domestically produced goods. This policy will have an impact on the ease of access to exports of goods to other countries due to the construction of infrastructure between countries.

3. Built with reference to the old Silk road

BRI seeks to connect the Chinese region with Central Asia, South Asia, Russia, Europe, North Africa, Southwest Asia, as well as northern sub-Saharan African countries. BRI was built with reference to the silk route which was used hundreds of years ago as a transcontinental trade route through Asia, Europe, and Africa.
The BRI is a global initiative but by its nature built on the historic Silk Road it places its primary focus on countries in Asia, East Africa, Eastern Europe and the Middle East, of which it is a region made up mostly of developing countries.
This program is a long-term cross-continental investment aimed at infrastructure development and accelerating the economic integration of countries along the historic Silk Road.
This was done because according to the Asian Development Bank (ADB), Asia faces a gap in infrastructure funding of around US$26 trillion until 2030, and to address this gap, the Belt and Road Initiative policy was made.
According to the government's official website yidaiyilu.gov.cn, currently 71 countries are taking part in the program which together represent more than a third of the world's GDP and two thirds of the world's population.

4. Forms of cooperation within BRI

Reported by the Belt Road Initiative website, BRI is generally divided into two components, namely the Silk Road Economic Belt and the 21st Century Maritime Silk Road.
The Silk Road Economic Belt (SREB) is China's attempt to build connectivity by land. This includes the construction of railroads, transnational highways, pipelines and gas, power grids, and other infrastructure-related projects to support success in the overland zone.
SREB also includes six development corridors, namely:
The 21st Century Maritime Silk Road is China's effort to connect seaborne trade routes which were also used as the main shipping lanes.
This shipping lane connects remote areas of China on the coast with international shipping lanes from Southeast Asia, the Indian Ocean, to Africa and the Mediterranean Sea in Europe which is then connected by rail or land routes in various regions.
The priorities for cooperation in the 21st Century Maritime Silk Road are:

It was initiated to ensure ocean health and contribute to improving human well-being for present and future generations.
China proposes that countries along the BRI path jointly conserve marine ecology and provide high-quality marine ecological services, so as to maintain global marine ecology security. Pragmatic cooperation will be strengthened to protect and restore marine ecosystems and conserve rare and endangered species.

Innovation is one of the key drivers for the sustainable development of ocean-based economies. Efforts will be made to increase cooperation in the fields of marine scientific research, education and training, and cultural communication, in order to increase understanding of the ocean, facilitate the application of scientific and technological innovations, and garner public support for intensifying marine cooperation.

Blue Partnership is an effective way to promote maritime cooperation. Such efforts will be made to coordinate policies, deepen mutual understanding, enhance mutual political trust, establish bilateral and multilateral cooperation mechanisms and to jointly participate in maritime governance, in order to provide an institutional framework for maritime cooperation.