The people of Chile today, Sunday, December 19, 2021, will determine their future in the presidential election. Two candidates are running: Jose Antonio Kast, 55, who is ultra-conservative and left-wing candidate Gabriel Boric, 35.
Both candidates are targeting middle class voters. "What is at stake now in Chile is democracy itself," said housewife Julia Acevedo, 80, who attended Gabriel Boric's closing campaign. "The country needs change and he, being young, can make a difference."
Ummatimes - Kast supporters, on the other hand, want stability. They say Boric - who is aiming for Chile's market-oriented economic model - will undo decades of growth and stability and criticize his alliance with the Communist Party.
"I will continue to support freedom," said Margarita Noguera, waving a Chilean flag stamped with the image of 55-year-old Kast. He claims to have experienced the "left dictatorship" of socialist president Salvador Allende's democratically elected president in the 1970s. 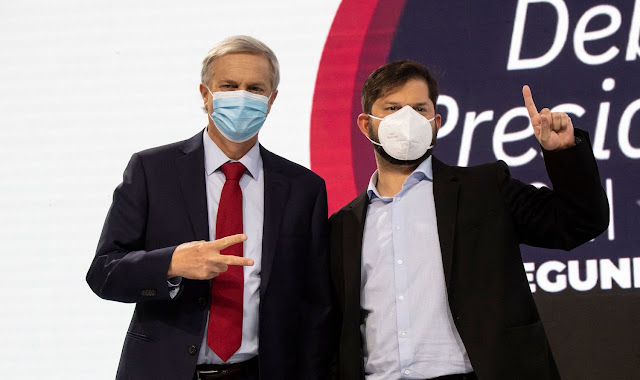 "I suffered a lot, like many other Chileans."
Angela Marambio, 53, said she had supported the centre-right candidate in November's first round, but switched her vote to Kast for the second round.
"Chile needs stability, order and security," he said.
Next: Stability Vs Change
Kast, a lawyer and religious father of nine, carries on the economic legacy of dictator Augusto Pinochet, whose bloody military rule from 1973-1990 toppled Allende in a coup and shaped the country's economic model.
Massive protests erupted in 2019 against the model, which many see as the reason for problems ranging from meager private pensions to expensive health care and education.
Cristian Morales, 51, a public official from Punta Arenas in the southern tip of Chile, where Boric is from, said a left-wing candidate could change things.
"I don't believe he will be able to make all the necessary changes, but he will speed up the process," Morales said, citing spending plans for retirement and education.
"If I retire tomorrow, I will fall below the poverty line. I have two small children, education is expensive. If we want more solidarity in society, the state has to get involved."
Boric, who rose to prominence after leading student demonstrations for better quality education, has been trying to channel the energy and demand for change sparked by the 2019 Chile protests.
Kast has done the opposite, with a tough law-and-order message that has drawn much of the country weary of protests.
Enrique Zuleta, 41, a businessman from the coastal city of La Serena, said for years he voted for the centre-left coalition that governed much of the post-dictatorship period and gave Chile a reputation for stability. Now he supports Kast.
"I didn't grow up in a far-right environment at all, but today my voice is pragmatic, for the national good," he said.
"Kast has a lot of ideological issues that I disagree with. But... he said he would respect the law. And that's important to me."
Boric's supporters say he will defend issues such as women's right to abortion - only allowed in certain circumstances - and will respect sexual diversity, in focus after the country this month approved same-sex marriage.
Kast has criticized abortion and same-sex marriage.
Polls show women, especially younger women, are more likely to vote for Boric.
"I'm afraid of Kast," said Andrea Ramirez, a 26-year-old public administrator. "He worries about me about the environment, the role of the state, Chilean pensions. And what rights will women have?"
This Presidential election is to replace Sebastián Pineera, who has been elected twice.