Chinese Foreign Minister Wang Yi voiced democratic rights for all citizens while speaking at the Bali Democracy Forum (BDF) via video channel. In his speech entitled "Supporting True Democracy for a Better Future for Humanity", the member of the Government Advisory Council or coordinating ministerial level said that democracy is a universally agreed upon human value.
"Democracy is not a special right of a particular country, but the right of all people around the world," he said, Thursday (9/12).
Ummatimes - Whether a country is democratic or not, continued Wang, the people of that country will decide for themselves. According to him, one country cannot force another country to implement the democracy that applies in its country.
For that, China is very confident in implementing democracy in accordance with the aspirations of its people. "And we really respect democracy in other countries. We will not export our democracy. We are ready to dialogue and exchange ideas with other countries according to the principle of equality," he said. 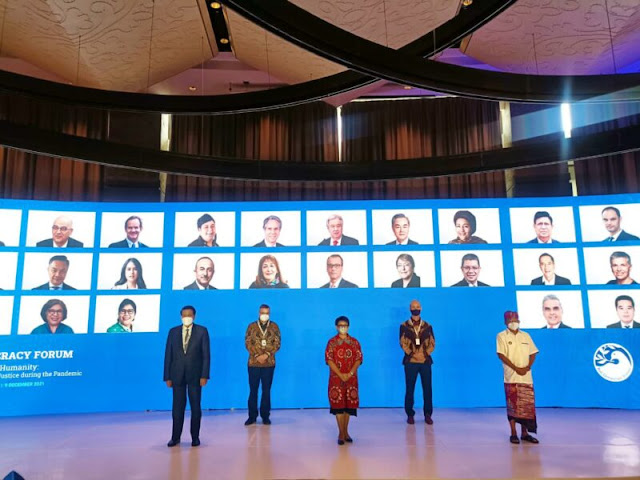 "We respect national sovereignty and defend the basic norms of international relations. We support democratic concepts with Asian characteristics," he added.
He invited countries in Asia to jointly uphold solidarity in overcoming global challenges. Wang explained that since the formation of the People's Republic of China, the Chinese Communist Party (CPC) has guided its people to find a new form of democracy that suits the conditions of their country. This year's BDF brings the theme "Democracy for Humanity: Promoting Economic and Social Justice in a Time of Pandemic".
Indonesian Minister of Foreign Affairs Retno Marsudi was also present as a speaker. Earlier on Sunday (5/12), Wang held a meeting with the Coordinating Minister for Maritime Affairs and Investment of the Republic of Indonesia Luhut Binsar Pandjaitan in Zhejiang Province, China.