France has opened an investigation into a syndicate that provides services for producing fake Covid-19 vaccine certificates.
Ummatimes - This is in the aftermath of the death of a woman who tested positive for Covid-19 at a Paris regional hospital.
News of the woman's death has attracted the attention of the French media.
Because he died after showing a fake vaccine certificate.
The hospital's head of intensive care said they would immediately administer antibody treatment to the woman if they found out she was not vaccinated.
According to the Associated Press, authorities have identified several thousand fake vaccine certificates in use across France, Interior Minister Gerald Darmanin said.
Darmanin said around 400 investigations had been opened to investigate the sale of fake vaccine certificates, some of them connected to health professionals.
Darmanin did not say how many people had been arrested so far, or provide details.
Furthermore, the French Government has tightened the rules regarding entry permits, which are required to enter all restaurants, public events and other public spaces.
To get the entry permit, French citizens must show proof of complete vaccination, negative virus test in less than 24 hours, or a certificate of recovering from Covid-19. 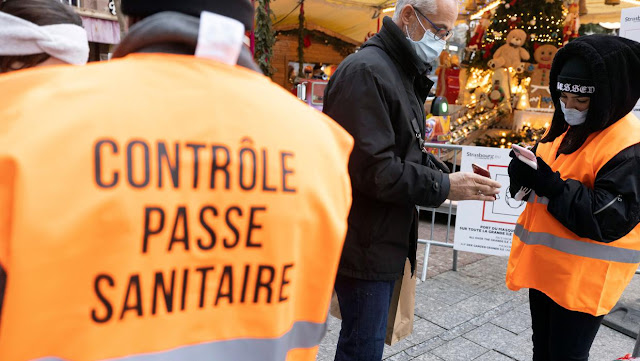 With more additional cases confirmed last week, France is also working to speed up its booster vaccination program in the hope it will be enough to ease the pressure on hospitals.
It is known that half of France's intensive care units are occupied by virus patients.
Hospitals in some areas have even postponed non-urgent surgeries.
More than 100 people with Corona virus are declared dead every day.
In other efforts, the government has closed nightclubs and tightened social distancing measures, but is trying to avoid a lockdown.
Health Minister Olivier Veran told Le Parisien newspaper that while the tide of the epidemic was ferocious, there were signs the rise was starting to slow.
He added 90 percent of people over the age of 65 have had booster shots so far.