Gas Explosion in Pakistan Kills 15 People, What Causes It?

Gas Explosion in Pakistan Kills 15 People, What Causes It?

An explosion occurred at the Habib Bank Ltd branch in the Sindh Industrial Trade Area, Karachi, Pakistan, Saturday (12/18/2021). The explosion left at least 15 people dead and 16 others injured.
"So far 15 people have died and 16 injured were taken to hospital," Karachi City administrator Murtaza Wahab said in a tweet.
But a senior local police official, Sharjeel Kharal, told reporters that the number of victims could not be confirmed, The Guardian reported.

A gas station located next to Habib Bank and a car parked nearby were badly damaged. Local television footage showed the bank full of rubble. The floor of the bank was torn apart, the windows shattered, and the iron bars bent.
In a statement on Twitter, Habib Bank said an explosion had damaged its branch and caused casualties and injuries. "Our sympathies go out to the bereaved family," he added.
Pakistani Prime Minister Imran Khan also offered his condolences and "heartfelt prayers" to the victims' families on his social media, Al Jazeera wrote. 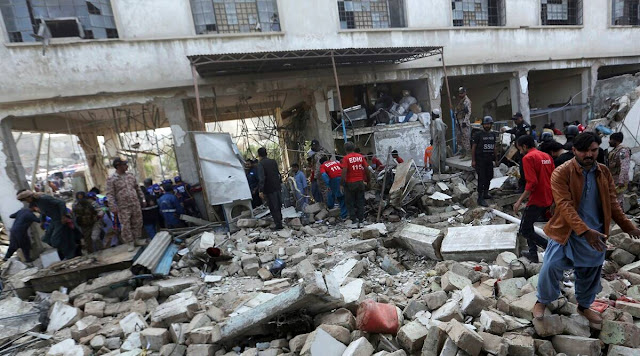 2. The cause of the explosion is suspected to be gas accumulation from the sewerage

A local police official, Sarfaraz Nawaz, said the explosion was likely caused by a gas leak. He suspected the building was built on top of a sewer line.
"Our explosives team is working to ascertain the nature of the explosion, but it appears the structure was built in a sewer and the probable cause was gas," Sarfaraz said.
Meanwhile, police spokesman Sohail Jokhio said the explosion was likely caused by the accumulation of gas in the sewer under the bank building, which came from Shershah municipal sewage, Al Jazeera wrote. Jokhio said it was not yet clear what ignited the gas, but a team of explosives experts had been called in to investigate.

3. Karachi will investigate the cause of the explosion

Many sewers in Karachi have been closed illegally, by constructing concrete structures over them. Karachi, which accounts for 60 percent of Pakistan's economic output, has long suffered from poor infrastructure, unregulated construction and failed municipal services.
Mukhtar Abro, a city administrator, said the illegal buildings on the waste area around the blast site were being vacated. It has announced that building construction in the area must be demolished, Al Jazeera wrote.
The Karachi city leader promised to investigate the cause of the explosion
"Investigations are ongoing to confirm the cause of the explosion & necessary treatment is given to the injured," Murtaza Wahab said in a Twitter post.