Indonesian and Chinese businessmen signed three memorandum of understanding (MoU) worth 1.76 billion US dollars or around Rp. 25 trillion for various business sectors on Bintan Island, Riau Islands.
Indonesian Ambassador to China Djauhari Oratmangun told ANTARA in Beijing on Thursday that the three MoUs were a commitment from business people from both countries for the financial, renewable energy and logistics sectors.
These sectors will be realized in sustainable development on Bintan Island. 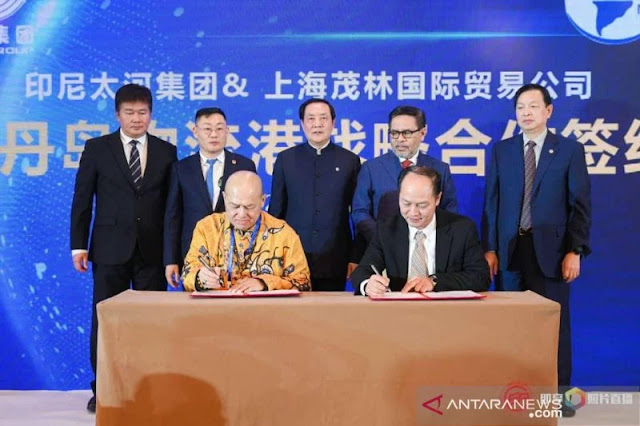 The signing was carried out on the sidelines of promoting Indonesia's investment at the China Economic Summit held by the Asia Brand Group, the China Entrepreneurs Association for Asian Economic Development (CAEDA), and Taihe Group Limited in Shanghai, Tuesday (28/12).
Ambassador Djauhari together with the Indonesian Consul General in Shanghai Deny Wachyudi Kurnia also witnessed the signing of the three MoUs.
China has been the main investment and trade partner for Indonesia.
"During the pandemic, the economic relations between the two countries are getting stronger with several potential cooperation sectors to continue to be developed, such as energy and infrastructure," said the Ambassador.
Taihe Group CEO Sukardi conveyed several investment opportunities in Bintan Island to Chinese entrepreneurs.
The organizers also gave an award to Ambassador Djauhari as one of the figures who played an important role in developing Indonesia-China economic relations.