Residents of the island region of New Caledonia voted on Sunday to remain part of France, in a referendum boycotted by pro-independence forces. French President Emmanuel Macron hailed the result as a resounding confirmation of France's role in the Indo-Pacific.
Ummatimes -  Official voting results showed that 96 percent of voters in New Caledonia chose to stay together in France. "Tonight France is more beautiful because New Caledonia decided to stay together," Macron said in a speech broadcast on national television.
Macron vowed to respect all New Caledonian citizens, including those who chose to secede.
The vote was monitored by the United Nations and regional powers, amid global efforts towards decolonization and amid China's growing influence in the region. Sunday's vote is the third and final in a decades-long decolonization process.
The decolonization process began when the violence in 1988 erupted. This led to the French government giving up New Caledonia's broad autonomy under the Treaty of Noumea. The process aims to resolve tensions between the indigenous Kanaks who want independence and those who want the territory to remain part of France. 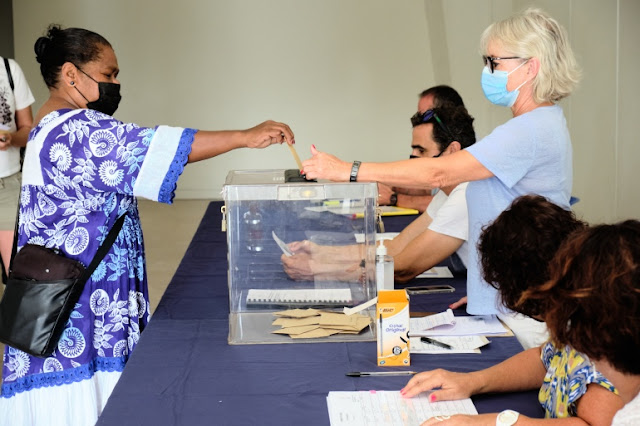 The process did not end with the final referendum. The state, separatist and non-separatist, now has 18 months to negotiate a new status for the region and its institutions in France. "We are reaching a new stage," Macron said.
Macron called for negotiations on a new structure to deal with the health crisis, boost the economy, improve women's rights and protect the environment from climate change.
In the first referendum in 2018, 43.6 percent of voters supported independence. Then in the second referendum in 2020, 46.7 percent supported independence.
Turnout in the third referendum this year declined. Tropical storm warnings have dampened enthusiasm for the vote. Long queues erupted at several polling stations, as strong winds swayed the palm trees that lined the streets of the regional capital Noumea.
Voters are required to wear masks and maintain social distance. But polling stations in some areas were deserted by voters. The question posed to the people at TPS 307 was: “Do you want New Caledonia to gain full sovereignty and independence?”.
Support for sticking with France increased amid the first coronavirus pandemic in New Caledonia last September. Until then, New Caledonia is one of the few remaining Covid-19-free places in the world.
As of November, the islands had reported 271 deaths from Covid-19, and the regional Senate declared a year of traditional Kanak mourning. Independence activists are not campaigning to honor the victims who died from Covid-19.
France is trying to strengthen its presence in the Indo-Pacific region, having lost a multibillion-dollar submarine contract with Australia. New Caledonia hosts one of two French military bases in the Pacific. Macron said the vote sent an important message to the Indo-Pacific region as it is undergoing recomposition and facing intense tensions.
The United Nations has supported New Caledonia's decolonization process and sent election observers to monitor the vote. The Pacific Islands Forum also sent delegates to observe the vote.