Lithuania will seek European help to counter Chinese pressure once it opens diplomatic ties with Taiwan, which Beijing claims as its territory.
Lithuanian diplomats left Beijing in a hurry when China was angry, downgrading its diplomatic ties. Lithuania is concerned for the safety of its diplomats.
The Lithuanian diplomatic delegation to China left the country on Wednesday, December 15, 2021 in a hurry, and diplomatic sources familiar with the situation described their departure as a response to "intimidation".
Ummatimes - China's foreign ministry said Thursday that concerns over the safety of Lithuanian diplomats in Beijing were unfounded.
Lithuania's presidential adviser told the Lithuanian public broadcaster that the Baltic nation's leader would seek the help of his European counterparts.
"The president will talk to EU leaders about the pressures we are facing, we think this will lead to a discussion of how the EU and in particular the European Commission can help Lithuania in this issue," said Asta Skaisgiryte.
"We want the conflict to be clear to our European partners, and that economic action will be as broad as possible," he said.
Claims that Lithuanian diplomats fear their personal safety or that China is barring its citizens from working in the country's offices are "purely fictitious," foreign ministry spokesman Wang Wenbin said at a briefing in Beijing earlier. 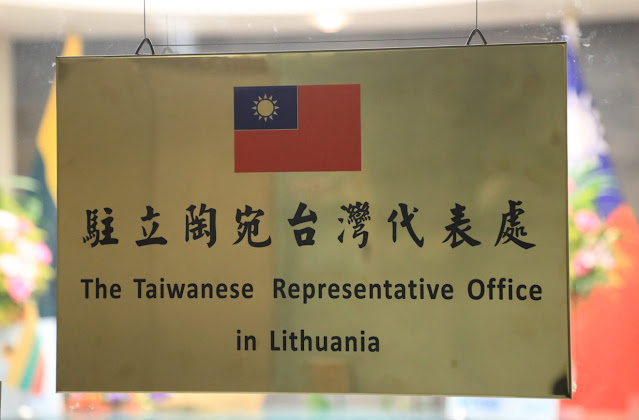 Lithuanian authorities said on Wednesday that they had summoned their top diplomat back from China for consultations and that the embassy would operate remotely for now.
Like most countries, Lithuania has formal relations with China rather than self-governing and democratically governed Taiwan, which Beijing views as its territory.
On Wednesday, 19 people comprising embassy personnel and their families left Beijing for Paris, a diplomatic source told Reuters. Another diplomat called their departure in response to "intimidation".
Speaking to reporters in Vilnius on Thursday, Foreign Minister Gabrielius Landsbergis said Chinese authorities had informed diplomats that their identity cards would soon be invalidated.
"We were given a very short time... We asked for a longer time, simply because it would be complicated to arrange the return so quickly. We didn't get an answer to the request, and people came back as quickly as possible."
A unilateral change to the status of a country's representative would violate international agreements, he said.
The abject foreign ministry did not immediately respond to a request for comment on Landsbergis' remarks on Thursday.
China has demanded that Lithuania change the status of its embassy in Beijing to a lesser attorney's office. This reflects the changes China made to its own embassy in Vilnius in response to the opening of a Lithuanian office in Taipei.
"The Lithuanian side has also never raised the issue of personal security to China," Wang said.
"If the Lithuanian side does not face reality, if it does not reflect and correct mistakes but neglects its own responsibilities, then it will only further challenge bilateral relations."
China is telling multinationals to cut ties with Lithuania or face closure from the Chinese market, a senior government official and industry body told Reuters.